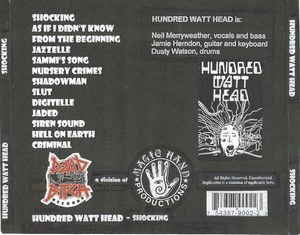 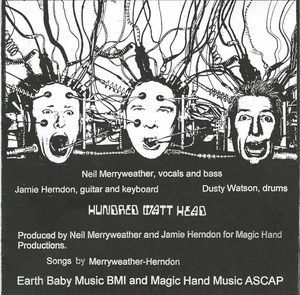 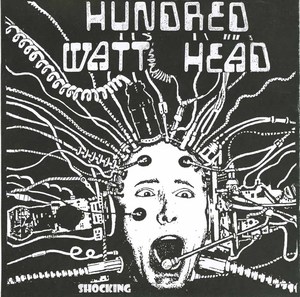 "This album reminds me of when Peter Gabriel was Genesis and David Bowie was Ziggy Stardust! A definite must for all fans of that kind of music."

When Neil came back to LA from Europe he called Space Rangers band mate Jamie Herndon to put together a unit to record some new songs. Jamie had just finished his association with the Nick Guilder band. Neil was introduced to drummer Dusty Watson by fellow bass player and Space Rangers fan Raymond Marzano. Neil took Jamie and Dusty into the studio where they recorded ten new songs in two nights. This was the beginning of Hundred Watt Head.

Although Neil and Dusty went on to play in the Lita Ford Band and recorded her debut album together, it didn't take long after that project ended for them to regroup with Jamie at Neil's studio to record more material. This went on for more than a decade.

The trio recorded over 50 songs over the years. This Hundred Watt Head CD features thirteen of those songs. There is still more to come as Neil, Jamie and Dusty still get together to record new songs.

watch an interview with Neil Merryweather on Icons of Rock: http://www.theneilmerryweather.com/video.html