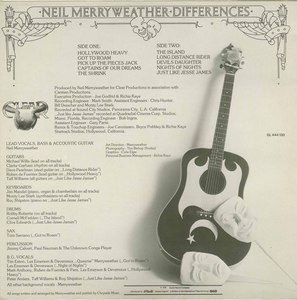 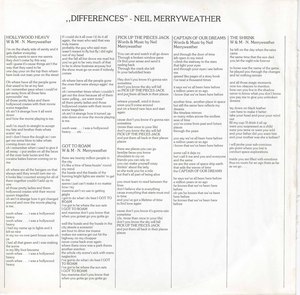 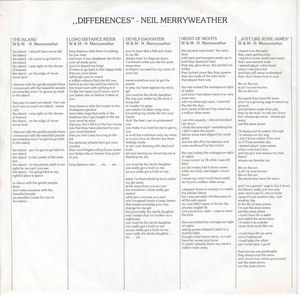 Neil met Mark Smith, a fellow Canadian from Toronto who had engineered the “Bachman Turner Overdrive” records. Mark brought Neil to Joe Godfried, the manager and owner of Sound City Recording Studios, and he agreed to give studio time to Neil. Neil wrote ten songs and brought in a crew of friends to play on the tracks including Michael Willis, his guitarist from the “Space Rangers”. The songs came from different places musically, so Neil called the collection “Differences”. Neil went to England where the songs earned him a writer’s contract with Chrysalis Music. Through a connection with Chrysalis, Dureco Records Holland releases “Differences”.

"To make along story really long, I was involved in so many recording projects at the time and was in need of a change. My closest friend at the time was Peter Anders.One evening we were writing together and he told me of this time in London when he was a staff producer for Motown when they opened up a division in England. Peter and ex "Trade Wind" bandmate, Paul Nauman, were hired to head up the production side of the Motown label there. He told me stories of London and I suggested that we get out of LA and go to London. He knew a lot of people there, and I remember that my Space Rangers album got an incredible review in Melody Maker, a big magazine there. We booked a flight and headed out to London.

Things didn't work out as far as Peter getting into England. While he was working there for Motown, he was partying way too much and living in a hotel, but never paid the bill. They put one of those brass things on the door knob when he came back to his room and he took the fire ax down from the wall and chopped the door down to get to his clothes and his stuff.He was arrested and got deported. So his name was on a list when we got to the airport in London.When we arrived in London, Peter found his name on a list of people that were undesirable and that had been deported, and they didn't want to let him in. Meanwhile, a friend of his, the ex-wife of the editor of Melody Maker magazine, was waiting for us because she was going to put us up in her flat in London. He saw her and called to her and said "Wendy, you've got to try these pills". He had thrown them all over the floor as they were dragging him away, and she was picking the pills up from the floor. They asked if I was with him and saw my Canadian passport, so I told them I had met him on the plane and they let me into the country. Peter was cool and said he didn't know me.

Wendy put me up. I had the tapes I had done at Sound City. I hit the pavement, going to various labels. I did a demo for Phonogram in London, but it wasn't Space Rangers. It was another couple of songs I put together on the spot with a couple of English musicians I found in a club. It was interesting stuff, but it wasn't enough to get me a deal, so I kept looking. Richard Cowley, whom I had met when I was with Mama Lion, liked my bass playing. He told me if I was ever in London to look him up. I called him at his new Cowbell Agency, and he turned me on to the guy that owned Orange Equipment who had a music store and managed John Miles. I went to see him and he took me on to manage me.But Miles didn't like the idea, so it didn't work out. However, I continued to shop my tape and eventually wound up meeting Ann Monday at Chrysalis Music and playing her my stuff. She liked it a lot and signed me as a writer. Another benefit of being at Chrysalis was that I got to meet George Martin who had an office there, and Shirley, his long-time secretary let me use his desk phone to call my family and friends back home. Just sitting at George's desk in his chair was a trill – to me, he's the greatest producer of all time. One day I got to meet him, what a nice man, needless to say it was an honor to shake his hand.

I got an advance and things started looking better. One of Ann's friends was a producer named David Hitchcock. After living with Wendy, I wound up staying at David's flat on Kensington High Street. Eventually I wound up at a Bed and Breakfast and again connected with Richard Cowley. He asked me to produce an act called "Johnnie Angel". I did a single for Decca Records and we became friends, and went to stay at his flat in Notting Hill Gate. At day's end, I got invited to the "drink-ups" at the pub get-togethers. There, I met another writer for Chrysalis, Gary Pickford Hopkins, a great guy who used to be in "Eyes of Blue". I guess they all knew my music. One day, he brought a bunch of guys to the pub to meet me. I met Peter Brown, the lyricist from "Cream" and Taff Williams who was the guitar player from "Eyes of Blue" and Bonnie Tyler.

I wrote a couple of new songs and needed to demo them. I found out about a rehearsal spot outside of London. I ran into someone who had a company that would truck people's equipment on tours and he had a farm outside of London. I made arrangements to put an act together and flew back to LA, rented a truck a put everything into storage in Mike Willis's mother's garage, and grabbed Mike Willis. Because funds were thin, we took a Greyhound Bus to New York City. We had a one-night stay over until our flight to London took off, and I re-connected with Peter Anders. We had dinner and talked about the outrageous airport incident. The next day, we took off for London and wound up staying at a Bed and Breakfast off of Hyde Park.

We went about to try to find other musicians, and I remember meeting this guy at one of these pub get-togethers. He was the keyboard player from "Matching Mole" and "Camel". His name was David Sinclaire, and he was willing to come into the new unit. We heard that Procol Harem's drummer, B.J. Wilson, lived in the town where the farm facility was. So, we wound up going to visit him and asking his to join the band. We started rehearsing and were working on some new material. David, Willis and B.J. went to a local pub in town and B.J. was talking to Willis asking him who his favorite guitar influences were – Willis was into McLaughlin and Peter Fripp and the more advanced guitar player types.B.J. asked "What about Steve Cropper?", and Willis said "Who?" B.J. freaked out and quit because Willis didn't know who Steve Cropper was, and that was the end of that. We wound up going back to London and picking up a drummer called Clive Edwards. I took Willis, Sinclaire and Clive into a little studio that David Hitchcock told me about.It was run by one of the guitar players from "Gary Glitter".David came in to oversee the recordings. We did about three new songs for Chrysalis.

I met a girl at a party called Aliba Bellingham, the daughter of Lady Bellingham, and her father was the Captain of the Queens Guard, and they lived next door to the Queen Mother. We became friends and started a little production idea called "Rocking Horse Productions". She put us up at one of the family's flats in Victoria. Willis and I were staying there, and she found another writer/singer that she really liked. She let him stay at the flat too. One day, we came back to the flat and Aliba was crying because she found him overdosed on drugs. The next day, her Mother turned up. Willis' sneakers smelled really bad and the Mother went berserk and threw the sneakers out the window. That was the end of that. We saw Aliba some days later and she invited us to a New Year's Eve party at a big mansion. Mike strapped on his Gibson and plugged into a pig nose, and played "Old Lang Zyne" like Hendrix would have done it. The rich old stuffy people loved it!

Mike started missing LA and we weren't doing anything really, and didn't have the funds to continue, so he went back to LA. It turned out that Chrysalis had a deal in Holland with a label called Dureco Records to handle publishing. They heard the collection of songs I had brought with me, and couldn't believe it wasn't released as a record. They contacted me through Chrysalis and arranged for me to come to Amsterdam. I took the train/ferry and that was my next world of wonder, an amazing place. They checked me into the Hans Brinker Hotel where I stayed while we negotiated to put an album out. The stuff was all so different that I decided to call the record "Differences".

After hearing "Differences", a newly signed Dureco Records act called "Carlsberg" requested that I produce them. They sent for me again and I returned to Amsterdam.It was quite a good album. England had the drinking thing and the Dutch took it a step further. They could drink for days and could still maintain a realm of reality – that was "Carlsberg".

Next, I talked to Dureco Records and asked about setting up a little production company and came up with a label called "Clear".