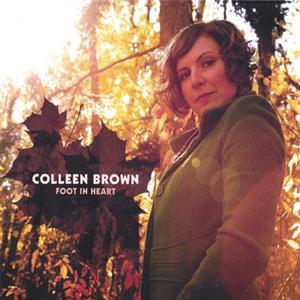 "All of my life I can recall my cheeks turning rosy, a change of stomach tide, and that ominous internal voice "what did I just say?" sounding off in my head. It happens every time I put my foot in my mouth, as that play on words would have it. But that is the reality of my existence: leaping before looking - and then looking, and looking some more. It occurred to me that this is also how I've approached love…which explains my preoccupation in writing songs about that". The new album, Foot in Heart, encompasses everything that phrase conjures. In theme it circles the gamut of emotion, from excitement- in the mere idea of finding love and satisfaction- to lust, passion, devotion, confusion, frustration, anger, and sadness at the end of a relationship. But in true romantic prairie girl fashion she brings it full circle.

Colleen grew up in Lloydminster on the Alberta/Saskatchewan border, and moved to Edmonton to study music at Grant MacEwan College in the Vocal Performance Program. Since graduating Colleen has performed more than 200 shows with her different projects, including singing and dancing in the now defunct decade show revue the Kit Kat Club; playing bass and singing in her all female original rock band the Secretaries; and with this project (playing piano and singing her own originals).

In 2005 Colleen performed live on the CTV televised program for the Installation of Governor General Michaelle Jean. She sang "A Love Song For the Everyman" inches from Prime Ministers past and present, as well as MP's and Senators. Colleen also represented Alberta in Ottawa in 2005 at Alberta Scene alongside many seasoned and well-known performers such as Ian Tyson, Terry Clark, Corb Lund, Rachelle Van Zanten, and Gordie Johnson. Along with the CTV program, Colleen has been featured on CBC Canada Now; CBC Newsworld; CFRN (Edmonton); CityTV (Edmonton, Calgary), CKSA/CITL (Lloydminster), and she has songs in rotation on Magic 99(99.3 FM, Rawlco Radio), and is played regularly on CBC Radio Nation-wide, CKUA province- wide, CJSR, CFCR, and several internet radio sites.

More recently Colleen was commissioned by the CBC to compose a song for their Alberta Reads programming, along with other prominent Alberta-based singer/songwriters. To date Colleen has written more than 125 songs for her musical projects.