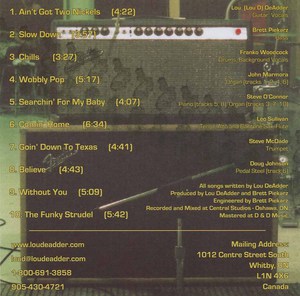 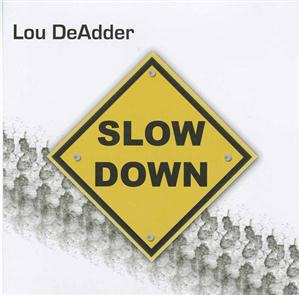 This is veteran Canadian singer and guitarist Lou’s second CD, following on from 2005’s ‘LouD’. Like its predecessor, this is a mixture of styles, though with the common thread of Lou’s always bluesy playing, stretching from the relatively straight shuffle of ‘Searching For My Baby’ to the pop-rock ballad trappings of ‘Believe’ with some very unusual flute from Leo Sullivan (who supplies gutsy sax elsewhere) and the folk-rock inflected ‘Comin’ Home’, which features pedal steel guitar from Doug Johnson. Much of the set though falls loosely into the blues-rock category, though with little unexpected twists and several tracks featuring jazzier playing than is usual in this genre. There is plenty of muscular playing from Lou and the horns in particular, and Lou’s singing is relaxed and convincing on a programme of all original and worthwhile material, underpinned with excellent support from the likes of John Marmora (organ on four tracks), Steve O’Connor (piano on two numbers, organ on a further three) and a rhythm section of Brett Piekarz (bass) and Franko Woodcock on drums – oh, and Steve McDade on trumpet.

Last year’s set certainly impressed me a lot. This year’s model shows that that was no flash in the pan. This guy has talent and he knows how to use it.
-Norman Darwen