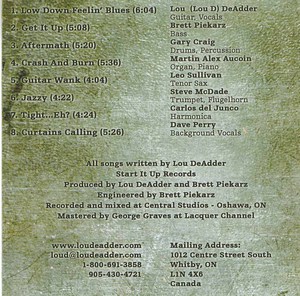 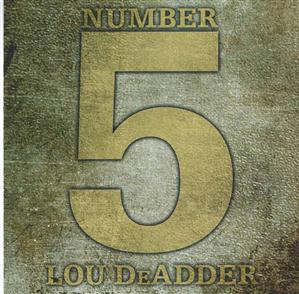 I've been following Lou DeAdder's career since his first release about five or six years ago. Over the years, Lou has made a name for himself through his talent and songwriting and has pretty much sustained a career by himself with some help from his friends including his redonkulously good backing band. The guy is a DIY marvel, having now produced, recorded, and released five albums all on his own and proving you can have a go on your own. This Canadian native has constantly strived, with the assistance of his band, to out do every release they've done and for the most part they have.

I think it's fair to say that five albums in, Lou and his band of blues rock troubadors have gotten pretty good at what they do. If you don't believe me you only have to listen to about three minutes of his latest album, Five, to see what I'm talking about. Lou and his band are tighter than a watchspring and play so well off of each other, you'd almost swear that they've been making music together their entire lives. Five is a cohesive, well produced record that puts Lou's rockin blues guitar up front and lets his talent take over.

While I prefer his jazzier, more instrumental work, the guy can clearly write a melody and set it to a few blues chords with the best of them. His band of merry men follow him around and keep the jam going with a non-stop barrage of laid back groovy riffs that have a hot night in New Orleans written all over them. Even when the band slows things down a bit during some of the instrumental tunes, Lou and company keep the songs action packed with imaginative arrangements and fantastic playing on all levels. Simply put, the chemistry between the members of this band is impressive and it's reflected in each and every song on Five.

There's really nothing bad you can say about Lou DeAdder, the guy is a trailblazer who takes it all on and churns out fantastic record after fantastic record. If rockin blues is your thing then you would be doing yourself a massive disservice by not purchasing this record.
-www.firstcoastnews.com

Lou DeAdder's press release describes him as a Canadian fusion guitarist. If fusion means proficient in varoius styles of music, that blurb is right on the money. Although not a blues artist the jaunty, breezy blues of "Low Down Feelin' Blues" that leads off this disc reminds in a positive way of blues songs done occasionally by big name pop artists. Nothing heavy here in music or vocal, just a very enjoyable listen featuring Lou's pleasant pipes and peppered by the harmonica of phenom Carlos Del Junco. Lou also interjects a brief 'bluesy' guitar solo.

If you heard this record without the benefit of liner notes, you might think it was a compilation of unissued tracks by fusion- era Jeff Beck and horn band Chicago and others. "Guitar Wank" and "Curtains Calling" sound like a slightly tamer Jeff Beck with the latter featuring Lou on vocal. On my first listen of "Aftermath" and "Tight...Eh?" I was waiting for a smooth vocal to kick in about about Saturday in the park or something else Chicago-y.

The two man horn section of Leo Sullivan and Steve McDade have that breezy horn vibe down to a tee. DeAdder also does a great job of mimicing Beck's stuttering, string bending, herky-jerky guitar sound all the while sounding fresh. "Guitar Wank" has a mellower middle section that sets up the release of final portion. "Jazzy" starts off life as a guitar- instrumental-for-a-Sunday-afternoon leading to a more complex Beck-affected mid-section. "Curtains Calling" has a lead in that sounds like an outtake from 'Blow By Blow', followed by a DeAdder vocal that could pass for 'Styx' or 'REO Speedwagon' with less emphasis on the pop-star dramatics. The double-tracked guitar rocker "Crash And Burn" comes on like 'Bachman-Turner Overdrive'.

A varied retro-ish expericence is waiting here for fans whose tastes lean towards classic rock. That vibe is presented while not coming off as mimicry, but more like a nod that Robin Trower gave to Hendrix. High production values and sure-fire band backing ensure an interesting day-dreamy-listen..