Canadian Soldiers in the Korean War - Songs of the Combat Soldier 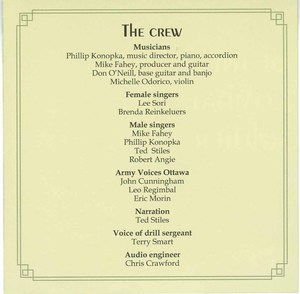 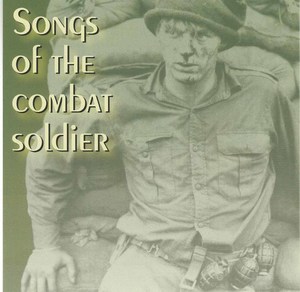 Songs of the Combat Soldier

It was their form of entertainment, something to brighten the mood and enliven the atmosphere of war.

Terry Meagher, a veteran of the Korean War put together a CD Songs of the combat soldier in order to preserve a piece of Canadian history.

“The idea was before everybody died off – it was a piece of history that would die off – so we put it on CD and a book goes with it,” he said.

Meagher got together a group of veterans and serving members of the Canadian Forces, as well as some music students to help put together the music.

“Outside of the musicians everyone is a veteran or serving soldier,” said Meagher, who served as an infantry soldier and paratrooper. “They volunteered their time to do this.”

With the war in Afghanistan, soldiers have the option of using the internet, cell phones and other forms of electronic entertainment to keep themselves busy, he said. In Korea, none of that was available.

“The songs are still known; some of them,” he said. “But Korea was the last war in which Canadian soldiers sang. They sang on the marches, that was the only entertainment in Korea. There were no CDs, no record players, no communication with anyone but his buddy. So he turned to singing for his entertainment.”

On Nov.6, Meagher and his group of musicians and singers will put on a sing-a-long at the Royal Canadian Legion in Kanata.

Some of the songs they will sing are from the two World Wars and others will be from Korea, some never before heard by the Canadian public, he said.

“This is not a choir that people are going to hear,” said Meagher. “We have tried to simulate the way the songs were sung in Korea; but that doesn’t make it boring.”

The songs include popular marching songs like A Young Canuck Soldier, the Airborne Song, and Arirang, a Korean national folk song.

“These are real army songs, soldier songs,” said Meagher. “These are songs that entertained the solders.”

He said some lyrics have been altered so it’s safe for families to bring their children.

“They are family listening so people can bring their kids to see this.”

The evening will be set up like a sing-a-long so the audience can join in, said Meagher.

“There will be some real surprises for some people.”

The event will start at 8 p.m. on Nov. 6. The legion is located at 70 Hines Rd., Kanata. For more information, contact Meagher at 613-258-5539 or visit the website at www.veteranspublications.com/p/war.html.

We wanted to not only bring pleasure to veterans of the Korean War but also to preserve a part of history that otherwise might be lost to the Canadian public and our heritage. Korea was the last war in which Canadian soldiers sang around campfires and in tents, canteens and on marches.

The more I listened to the songs and pondered their words the more I came to understand that the songs told a story, revealing the souls of the soldiers who sang them. But the songs didn’t tell everything. Though they hinted at the hardships, the dangers, the sometimes terrible courage, they didn’t flesh them out and they didn’t put the sacrifice into a world context: the struggle between the free world and Communism.

As important, they didn’t tell how the Canadian infantry soldier was honed through “splendid isolation”, a practice not invented by Colonel Stone of the Princess Patricia’s Canadian Light Infantry but certainly perfected by him. Stone isolated his soldiers for five weeks among the Korea hills, away from civilization’s distractions until they were splendidly focused on war. In such an environment, he was able to cull the unfit while the rest grew in camaraderie and integrity through the hardships of training.

It was an approach that set Canadian combat soldiers apart from the rest of the army and prepared the Vandoos to successfully hold off four days of enemy attacks launched from Hill 227 in Korea without giving up any ground. It was this type of approach that prepared Lieutenant Ed Mastronardi and his platoon to hold off a battalion on the Songgog. It was this type of approach that enabled a company of Canadian infantry hit by 2,000 rounds of artillery and mortar in 20 minutes, to hold fast on Hill 187 even after bunkers collapsed and trenches caved in and the ground was shaken as though by an earthquake.

A few years ago, I had the good fortune of having dinner with some warrant officers at Camp Petawawa. They worried about the army’s ability to create “splendid isolation” so essential to cohesiveness and morale building. Soldiers on guard duty among the Petawawa pines or on the sand dunes by the river had trouble experiencing the cohesiveness soldiers did so many years ago. At 8:00 o’clock at night soldiers in Korea turned to singing for their entertainment. But the soldier of today calls his girl friend from the field on his cell phone or listens to music on his iPod.

As much as possible, we have tried to preserve the historical authenticity of the songs, some of the roughness in which they were once sung. Songs that were not suitable for family listening have been omitted, and the language cleaned up a little in a few.

These are singalong songs that Korea veterans as well as other veterans will enjoy. Some of the songs were from WWI and WWII but many are uniquely Korean War vintage. The CD includes the Korean National Folk Song, “Arirang”; the best known war song in the world, “Lili Marlene”; the most popular song of WWI, “Mademoiselle from Armentieres; Barbed wire blues”; and “A young Canuck soldier to Tokyo on leave”. The poem “Blood on the Hills of Korea,” written by Patrick O’Connor the night before he was killed, has been set to music. The final song, “Be not afraid” is a tribute (a pass the torch song) to peacekeepers and soldiers in Afghanistan.
-Terry Meagher