Amos the Transparent - My, What Big Teeth You Have... 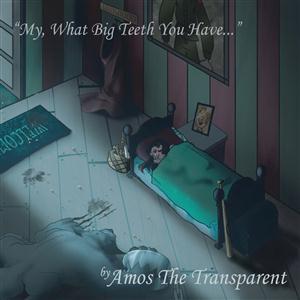 For any long time reader of herohill, you'll know are quite smitten with Ottawa's Amos the Transparent. We gave them the distinction of #2 on the 2007 Canadian album of the Year list and asked them to open up for The Inbreds reunion show at the herohill Pop Explosion last year. The way Chandler and Wilson melded bedroom pop with anthem ready classic rock was pretty breathtaking, but the thing that made Everything I've Forgotten to Forget stick in my brain was quickly the got to the point and how powerful their statements were.

"The songs are tight, the arrangements crisp and succinct. In most cases, too many cooks spoil the broth and too many guitars spoil the sounds. Huge crescendos are all well and good, but endless meandering that is all too common in today's indie scene is another thing. AtT never wastes a note."

So when Jonathan sent over the songs from the new Amos EP, I was a wee bit excited. My, What Big Teeth You Have is the first new material to surface since their record, and expectations were high. With the success and acclaim the LP got, you could almost expect the band to craft another collection of epics and wait for the praise to come in. Instead, AtT throws the listener a steady diet of nicely executed change ups to keep you guessing, but never fails to deliver on quality.

The first three songs show a very different side of the Ottawa based band. The M.O.B. Catalogue is more inline with something you might expect from Chandler's former band mate, as they explore a much harder edged synths/guitar riff and the EP opener, This Town, is full of distortion and uses a nice build, but they manage to soften the sounds with the nice female backing vocals courtesy of Kate Cooke. She and Chandler's vocals work well together, and help prevent the free flowing build from overpowering the song.

But for me, it's the EPs second song that really shows off the talent of the band. Up, Up & Away lulls you into the comfort of another big bedroom pop track. The childlike freedom you feel as Jonathan repeats, "up, up & away" and the nostalgic look back to some fatherly advice creates a comfortable escape, but around the 2:40 mark the band starts to unravel the threads of our security blanket. Blasts of guitar contrast chimes and the slow kick drums gradually gathers momentum until the band explodes into a chaotic, guitar heavy breakdown. Just when you start to get into the heaviness of the effort, Cooke and Chandler's vocals shimmer revealing another layer to the song before abruptly signing off.

It's not until the last two songs that the band treads on any of the same territory you'd expect from them. Greater Than Consequence might sound like the type of bedroom pop you'd expect from Chandler, but in reality it's a reworked song penned by keyboarder Mark Hyne. It's a song that has evolved with the band, and the simple beautiful strums of an acoustic, layers of strings and keyboard textures, and harmonies (and choral outro) float perfectly into the driving bass line and keep time drums of Lemons. The pleasant sounds provides the support for Jonathan's emotional vocals and really this song is as close as the band comes to revisting the sonic palette they crafted their debut LP.

It's obvious that this isn't the same band that a lot of Canadian music bloggers fell in love with a few years back. No, the new Amos the Transparent is bigger and bolder, and unafraid of risk. It might only be 5-songs, but it shows just how many different paths the band can take and how rewarding each of those path are.