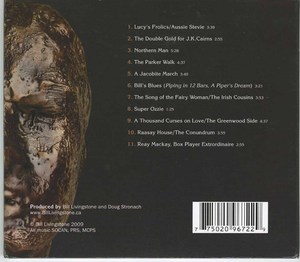 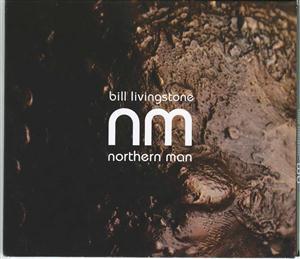 Northern Man is the latest recording from Bill Livingstone, the long-time Pipe-Major of the 78th Fraser Highlanders Pipe Band. The album's title is taken from a striking bronze sculpture from a Northern Ireland artist, the image of which is featured on the album artwork.

The CD is an ambitious project, with varying musical styles, sophisticated arrangements and, with the exception of a few contributions from outside composers such as Michael Grey, the majority of the material is by Bill himself.

Northern Man opens with a lively track of "Lucy's Frolics" / "Aussie Stevie," and then moves into "The Double Gold for J.K. Cairns." I enjoyed the Breton style opening of this second track and the seamless addition of the pipe band corps. Great stuff.

The following two tracks, "Northern Man" and "The Parker Walk," are to me the highlights of the CD. "Northern Man" has a very emotional, anthem-like feel to it. "The Parker Walk" is more of a suite, nicely constructed. I really enjoyed the Irish flute playing of traditional music veteran Pat O' Gorman (Rare Air, Na Caberfeigh). Another interesting track is "Bill's Blues," featuring some bluesy double tracking with Scottish small pipes.

A bit of a surprise, but it was nice to hear Livingstone singing, with backup vocals from producer, arranger and contributing musician Doug Stronach, on "The Greenwood Side" as well as the skat vocal style on "Aussie Stevie" – very credible vocal performances on both tracks.

Overall, Northern Man is well paced, interspersing the differing musical styles and tempos of the tracks effectively to keep the interest throughout. Top marks to Doug Stronach for his contributions. The playing and arrangements, with a few very small wavers, were generally very tight and well done.

Northern Man received two very enthusiastic thumbs up from both of my young sons, who are often at odds with dad and the amount of traditional music that he has on the car CD player. While this CD might not be the cup of tea for those who like to hear only strictly traditional, straight-up Highland bagpipe music, it does provide another fresh take on that instrument with the limited nine-note scale. In my mind, anything that catches the interest of the next generation is positive, indeed.