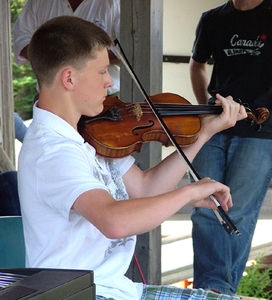 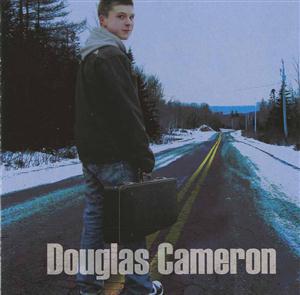 Now at the age of 16, Douglas has been turning heads in the Cape Breton fiddling community since the last 7 years. Trained by dedicated teachers like Bonnie Jean MacDonald, Margie and Dawn Beaton and Andrea Beaton, Douglas has absorbed and then exuded the proud history of the Cape Breton style of Celtic fiddling. Born and raised in the northern Inverness County community of Belle Cote, he has been playing in concerts since the age of 5 on piano, then the fiddle since the age of 9.

Standing ovations have erupted in venues like the Celtic Colours International Festival, a Strathspey Place ECMA Showcase performance in Halifax at the Old Triangle in 2007, and many concerts around Cape Breton Island. He already plays many of the larger square dances in Cape Breton. J.P Cormier took an intense interest in Douglas' art and worked with him to record Douglas' first CD this winter.

On the CD, Douglas collaborates with both well established performers (like JP Cormier, Hilda Chiasson-Cormier and Joey Beaton) and some new rising stars (like Marc Boudreau and Colin Grant). He also includes cuts with his father, Lawrence, and his grandmother Catherine (Rankin) Cameron. The CD shows Douglas (at the eager age of 15)honouring the tradition handed down to him by his teachers and the many great Cape Breton fiddlers that have shaped the great influence of the Cape Breton fiddle.