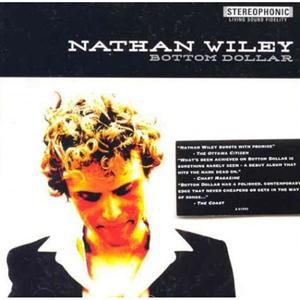 This debut album from the Prince Edward Island singer begins with the title track, "Bottom Dollar Baby," a tune that sounds like Tom Waits backed by a tamer, subdued version of the Attractions. The sultry groove is subtle but is bound to entice the listener with its minimal-meets-Latin feel. From there the album moves into a dreamy, folksy mode of pop on "Comeback," which Wiley nails with the precision of Ron Sexsmith, Wilco, or Elliott Smith. A midtempo murky roots number in the vein of Mark Knopfler or Dire Straits is what most will make of "Black Bones." Yet he is at his best on the somber and sullen accordion-tinted "Home," which resembles early Neil Young, an acoustic-leaning Springsteen, or Beck circa Mutations. It's a simple track but a very memorable one. The Southern sound of "I Come Down" is another gem that he delivers with care, a midtempo Americana track that would give the Cash Brothers a run for their money. Wiley ventures back to a sound on the opening track with "Long Gone," a number that could have been produced by Daniel Lanois. The lone tune that doesn't quite hit the mark is the laid-back "Till I'm Better," a song that Wiley could have done in his sleep, it seems. It's a decent effort but pales compared to the earlier material or the ensuing "Straight and Sober," a train-rolling type of song that chugs along nicely. The finale, "Long Live Sin," has Wiley at the top of his game -- a lovely, subtle, and hushed track that lures the listener in immediately. It's an extremely polished debut for a musician whose talent in terms of music and songwriting far belies his years.
-Jason MacNeil