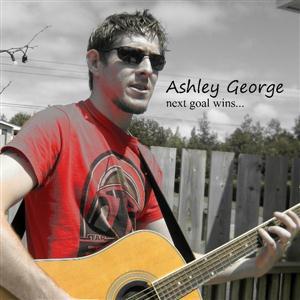 After 10 successful years with his band, Beyond Ash, Ashley George is releasing his first solo project. The recording, Next Goal Wins, is a compilation of songs he has written over the past five years. “It’s something that I’ve always wanted to do,” said George. “I write a lot of songs that I don’t play with the band that are more folkie or don’t fit well with the heavy guitars and drums. I’ve written a lot of music that I haven’t put out yet and I figured now’s the time to do it.” George teamed up with friends and local musicians, Manuel and Fleur Mainville, who play drums and violin, respectively, on the album. “It’s almost like folk rock,” said George. “Just guitar, violin, vocals, djembe, and there’s some harmonica and accordion on there as well. It’s easy listening.”

Next Goal Wins is dedicated to George’s father, Jim, who passed away last February. One of the tracks, Sing With Me, was written for him in memory of the times he would get up on stage and sing with the band. The CD also looks like a soccer ball because of his dad’s love for soccer. “He was a coach and would organize pickup and scrimmage games during practices,” said George. “He always said ‘next goal wins’ at the last two minutes of the game. Everybody around Pictou County knows that saying. So [the album] is dedicated to him.”

George’s father is not the only one to thank for this album. George’s mother, Linda, and aunt, Laura Lannan, have been a strong source of encouragement for him. His wife, Doreen, has also been an important part of his career. “My wife has been wonderful and supportive of my music career over the past 10 years,” said George. “She has been by my side through thick and thin.”

George’s solo album isn’t the only big news in his life. He and his wife are also expecting a child in November. George won’t be doing any extensive touring to promote Next Goal Wins until after the baby is born. In the meantime, he plans to play local shows in Halifax, New Glasgow, Canso, Windsor and Port Hawkesbury.

To top off his busy schedule, George is in the midst of recording a new album with Beyond Ash. The band’s fourth CD is set to be released this December.
-Angela Saieva angela@pictouadvocate.com