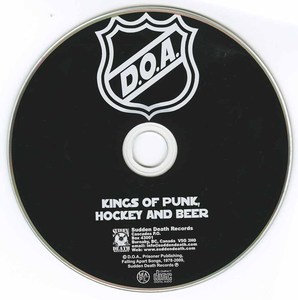 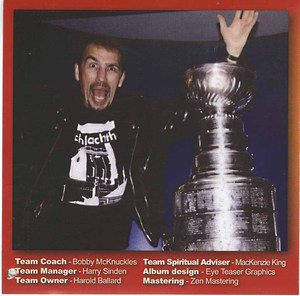 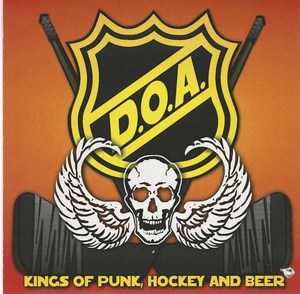 Kings of Punk, Hockey and Beer

D.O.A. Canada’s punk legends and the originators of hardcore punk pummel you with a great new album, Kings of Punk, Hockey and Beer. A short time ago, Canadian punk godfather JOE SHITHEAD KEITHLEY was sourly contemplating the namby-pamby-ness of the new National Hockey League style, as he reached for the solace of a beer, it occurred to him, “Hey, damn this corporate NHL crap! Let’s give the people some real rough and tumble on the ice! The D.O.A. way!”

So that’s what this is, D.O.A. go back to their roots. They invented the “Hockey Rock” genre with their break though "Taking Care of Business" video in 1987, that featured BTO guitarist Randy Bachman. (Of course all due credit going to Phil Esposito and Marcel Dionne for their “interesting” attempt at hockey rock in the early 70’s) The band then formed their own team, The D.O.A. Murder Squad, perpetual champions of the V.M.H.L., out scoring rival hockey bands like "Bad Religion", "The Hanson Brothers" and "SNFU" and roughing them up just for fun.

This album is a knock ‘em down, beat ‘em in the alley affair that combines three important things in the D.O.A. world: Punk, Hockey and Beer! The boys smash you into the corner with the anthemic Donnybrook, then they slash you with Dead Men Tell No Tales, just as your coming back to consciousness they pitchfork you with Beer Liberation Army and Beat ‘Em, Bust ‘Em. The kings of high sticking also nail you with a great version of the Stompin’ Tom Conners classic, The Hockey Song. As you skate further back into your own end they hit you with a powerful re-write of wrestler Freddie Blassie’s Pencil Neck Geek.

All in all it’s a non stop bruising affair that will have you limping to the trainer’s room looking for a cold one. Come join in the mayhem with D.O.A., the Kings of Punk, Hockey and Beer!