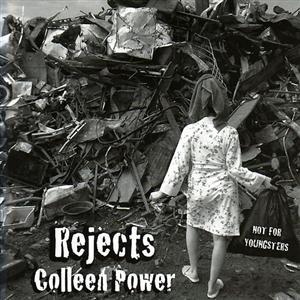 Thank you for checking out Rejects!

This CD marks the onset of my career in the field of home recording.

Rejects is a collection of songs and spoken word pieces. I recorded nine songs in a couple of months.

Toys, Not a Christmas Song and Sketchy Jerome were demos recorded by Sandy Morris at Cool Blue Studios, in hopes of me getting a grant to do another record. They were turned down by funding agencies a bunch of times. I lost track of exactly how many.

Way Behind the Music and Thanks to No One were inspired by being turned down so many times.

New Townie Man, Sketchy Jerome and Dead Bird in the Garbage are songs to be used in Downtown Freaks, a comedy series that I am writing with Roger Maunder.

Me or the TV, Lemon Meringue Pie, Ode to Major Labels, Colonel Sanders and Mary Brown and Cunnyhopper Blues were kicking around for years and I didn't know what to do with them.....

Now they all have a home.

Thanks to Brett Zilahi for making the record sound fantastic.

Thanks to Robert Buck at MMS Atlantic for always getting CDs to the Rock on time.

Thanks to all my fans, friends and family for encouragement in this endeavor.

My wonderful daughters, Robyn and Clare, my partner Roger Maunder and Declan, without you all, I don't know what I'd do!

Thanks to Roger Maunder Sr. for being so supportive and nice!

Thanks to everyone who played on the CD. You all have a special touch and you made the music sound so much better. I wish I had some money to pay you.

Thanks to everyone who pre-bought CDs and sent notes of encouragement. I got some lovely cards. It's nice to know that I can count on people like you who support my artistic endeavors!!

Thanks to those who invested in my previous CDs. As you know by now, this racket is not a money making venture. At least not for me. With the state of the music industry, who knows. I will be lucky to break even with this CD no matter what happens. If I ever make any money or someone famous sings one of my songs or something, I will be able to pay you all back.

Thanks to the excellent women who watched Clare so I could put this together: Melanie Ozon, Geraldine Hollett, and Colleen Malone.

Thanks to Neil Conway for being here and helping me get started on this whole project. Your advice and knowledge are invaluable.

Thanks to Neil Conway, Mark Bragg, Scott Hammond, Sandy Morris and Derm English for loaning me their gear and/or instruments.

Thanks to Sarah Hansen and Liz Solo for listening to me complain!

Thanks to Mark Wood, Robyn, Roger, Lois Brown and Neil Conway for listening to songs in their earlier forms and giving feedback.

Thanks to anyone who put me up and put up with me when I was on the road since the last CD, especially Sean Hynes and Joann Davis and Jody Maclean and Mike Morrison.

Thanks to Don Ellis and Sandy Morris for inadvertently teaching me how to get good sounds, and figure out this recording thing through many hours of me watching you do your jobs.

Thanks to all the press who covered this launch: Bryanna at The Scope, Kerri Breen at the Scope, Krissy Holmes and Paddy Daly from Roger's Out of the Fog, Heidi Wicks at the Evening Telegram, Geoff Meeker, Joey Basha at The Current, Tom Ronan and Angela Antle from CBC's Weekend Arts Magazine and anyone who I forgot...sorry.

Thanks to all the radio stations who play real music, especially the CBC and Radio Newfoundland.

See you on the road!