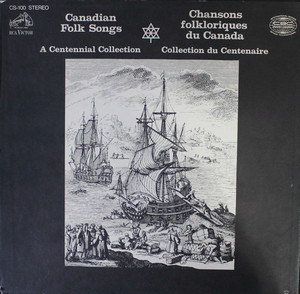 Canada has a vast treasure of more than thirty thousand folk songs and variants, most of which are little known beyond the different regions in which they have been collected. Most of these songs consist of well preserved versions of many ancient traditional ballads and folk songs of France and the British Isles, from where Canada's first European settlers came, and whose descendents now number more than 15 million people, or approximately 75 percent of the country's total population.

But, apart from the traditional songs inherited from Europe, recent researchers have collected a rich harvest of "home-made" songs and ballads of native Canadian minstrels— known and unknown— who composed their songs during their leisure hours, or while they worked as farmers, soldiers, sailors, fishermen, lumberjacks, fur-trappers, railroad-builders, cowboys and miners, etc. This great wealth of folk song was hardly imagined before the turn of the twentieth century, although Canada's first important collector— a Québec pianist and composer named Ernest Gagnon, had published an excellent and still highly valued volume of about 100 traditional French folk songs and variants, under the title of Chansons populaires du Canada, as early as 1865, in which he began his preface with the following prophetic sentence: "Le nombe de nos chansons populaires est incalculable". However true Gagnon's prophecy has proved to be, it may be assumed that his statement referred only to the French-language songs of Canada, and not to the surprisingly large number of English-language folk songs and ballads that have also been collected in recent years, mostly in the eastern half of the country, from the Atlantic Provinces to Ontario.

In this Centennial Collection of Canadian Folk Songs the Transcription Service of the Canadian Broadcasting Corporation, in collaboration with RCA Victor Company, Ltd., hopes to spread a greater knowledge and appreciation of some of Canada's songs, and of how they reflect the cultural heritage of most of its people. Beginning with Canadian variants of ancient ballads and traditional folk songs of France and the British Isles, the series continues with legendary ballads and historical songs, ballads of romantic adventures and tragedies, love songs and laments, songs of courtship and marriage, songs and ballads of the lumber camps and other miscellaneous work songs, and assorted "sociable" and "social" songs.

9 – LP Albums, Each in a White Paper Sleeve

6 - Songs of courtship and marriage

7 - Songs and ballads of the lumber camps