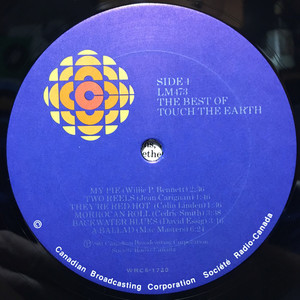 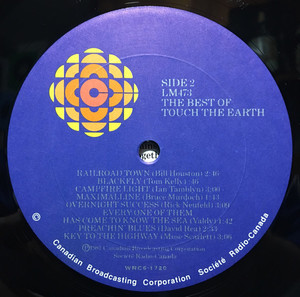 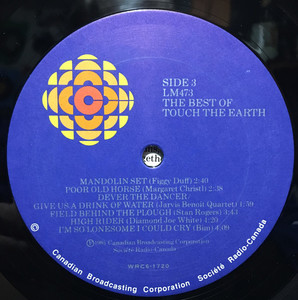 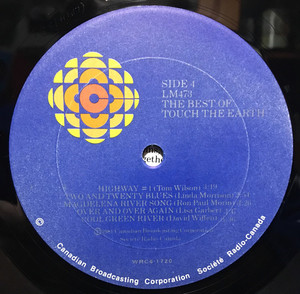 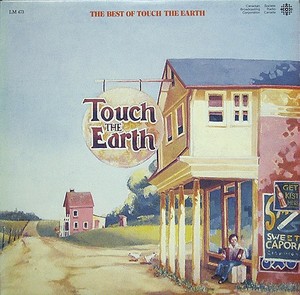 The Best Of Touch the Earth

WILLIE P. BENNETT - MY PIE (W.P. Bennett) Brocolli Ballads (PROCAN)
This cut was played on the very first Touch The Earth show in 1974. Willie, who at the time was still relatively unknown, has since risen to national prominence as a songwriter and performer. It was recorded in Studio 4S in Toronto.

JEAN CARIGAN - TWO REELS (Traditional)
This recording was made in Jean’s living room in Montreal with Gilles Losier accompanying him on the piano.

COLIN LINDEN - THEY’RE RED HOT (Robert Johnson) (arr. Linden, MacLean, Whiteley)
When this song was recorded in 1975, Colin was, to all our astonishment, only fifteen years old. To say he was a blues “prodigy” is self evident. He has since matured into one of the most brilliant blues and rock guitarists in the country playing lead for the likes of Amos Garrett as we as leading his own band.

CEDRIC SMITH - MORROCAN ROLL (C.Smith) (CAPAC)
Cedric was one of the founding members of the Perth County Conspiracy and his interest and skill in combining theatre and music is evident in this cut. He was joined by Terry Jones, another Conspirator, on this session recorded in April, 1976 in Toronto.

DAVID ESSIG - BACKWATER BLUES (Traditional, arr. And adapted by David Essig) Peregrin Songs (CAPAC)
The place was Faro, Yukon Territories, and the event was the first annual Farrago Folk Festival in 1977. Dave was really fired up and gave one of the best performances I’ve ever seen him do. Sure glad the tape was rolling!

MAC MASTERS - A BALLAD (Traditional)
When we took the show to Newfoundland in 1975, everyone told us to look up Mac in Arnold’s Cove. Mac was an old merchant sea captain who knew hundreds of songs. We went to his house for a fine kitchen “Time” and rolled tape as song after song and story after story flowed from him and some of his neighbors who had dropped in. The song on this record was recorded on his boat out in the harbour. Mac has since passed away. This cut stands as a tribute to one of the most interesting people we met in the five-and-a-half years of Touch the Earth.

The first four songs were recorded on “The Canadian” the CPR train which travels across Canada. We did a number of shows on this train as part of our 1978 western tour.

BILL HOUSTON - RAILROAD TOWN (W. Houston) Ojibway Country Songs (CAPAC)
Recorded somewhere north of Lake Superior, this song was a perfect evocation of the feelings we all had aboard the train in the Northern Ontario wilderness. A number of people stuffed themselves in to the small train compartment to help Bill out on this one including Tom Kelly, Bill Garrett and Curly Boy Stubbs.

IAN TAMBLYN - CAMPFIRE LIGHT (I. Tamblyn) Manda Music (CAPAC)
Ian’s originally from Thunder Bay and often travels through Northern Ontario on canoe and camping trips. Songs of his like this one really capture the feeling of that country.

BRUCE MURDOCH - MAXIMALLINE (B. Murdoch)
Originally from Montreal, Bruce was quite a well known singer-songwriter in the mid-sixties. He now lives in Alberta and we picked him up in Calgary for this the Rocky Mountains leg of our train trip west. Maximalline has got to be one of the prettiest songs I’ve ever heard.

VALDY - EVERY ONE OF THEM HAS KNOWN THE SEA (Valdy) Klavic Music/Irving Music (PROC)
Our western tour ended in beautiful B.C. and we hopped a ferry over to Salt Spring Island to visit Valdy. He sang this song for us in his living room. Beautiful country, gracious host, good music, and a fitting end to what was Touch’s most memorable tour.

DAVID REA - PREACHIN’ BLUES (R. Johnson) Horoscope Music Pub. (PROCAN)
David is one of Canada’s most well known guitarists having played with Gordon Lightfoot, Ian and Sylvia, and many others. He is also a fine solo performer as this cut shows… one of the best interpreters of Robert Johnson’s music I’ve ever heard.

MOSE SCARLETT - KEY TO THE HIGHWAY (Traditional)
Mose is joined here by Jim McLean on washboard and harp. Scarlett is a fine guitarist, great singer, and one of the best backgammon players I’ve ever met. This is a great rendering of an old blues classic.

FIGGY DUFF - MANDOLIN SET (Traditional)
This group is doing for Newfoundland music what Fairport Convention and Steeleye Span did for traditional British. This recording was made in September, 1976. The group is still together and going strong with a fine album to their credit.

MARGARET CHRISTL - POOR OLD HORSE (Traditional)
One of the strongest traditional singers I’ve ever heard, Margaret did herself proud on this 1979 session with Eric Nagler, Dennis Pendrith and Rick Avery.

THE JARVIS BENOIT QUARTET - DEVER THE DANCER / GIVE US A DRINK OF WATER (Traditional)
This is one of the most innovative traditional bands around. There’s a surprise around ever corner with the arrangements these guys come up with. This was recorded in their hometown, Halifax, at Audio Atlantic a couple of months before we went off the air.

STAN ROGERS - FIELD BEHIND THE PLOUGH (S. Rogers) Fogarty’s Cove Music (PROCAN)
Here’s a new song from one of the country’s best and most liked songwriters. It too was recorded in Halifax, but deals with the plight of the prairie farmer. Accompanying Stan are brother Garnett on fiddle, Dave Eadie on bass, and Curly Boy Stubbs on guitar.

DIAMOND JOE WHITE - HIGH RIDER (J. White)
Diamnod Joe is a great singer and character from Alberta who we first heard about through Valdy (you’ll hear Joe and Valdy together on Valdy’s “Family Gathering” album). This song, recorded in Calgary, is about John Ware, a famous black cowboy who lived near Pincher Creek around the turn of the century… a true Canadian legend.

BIM - I’M SO LONESOME I COULD CRY (H. Williams) Acuff-Rose Music (ASCAP)
From the kid with the funny mane comes what I consider is the definitive version of the Hank Williams classic. Recorded in the converted ballroom of the old Hotel Vancouver in 1976.

SIDE FOUR
In the three years of presenting “The Songwriters” on Touch the Earth I worked with and interviewed over one hundred singer/songwriters. To try to choose five of these for this album was, to say the least, difficult. The five artists presented here should demonstrate the breadth of style we encountered doing the show, as well as the quality of the songwriting found in this country generally. I hope you enjoy listening to these songs as much as I have. Better yet, if you know any singer/songwriters in your area get out and support them. They really deserve it.
-Bill Garrett

TOM WILSON - HIGHWAY #1 (CAPAC)
Tom was born in the U.S. and moved to Canada some ten years ago. Highway #1 came from one of our more country sounding sessions, and is a classic “ON the road” song.

LINDA MORRISON - TWO AND TWENTY BLUES (CAPAC)
Linda Morrison is a Montrealer who is still relatively new to performing. Despite this, Two and Twenty Blues is a very fine example of how new lyrics can be applied to a more traditional blues form. Caitlin Hanford sings harmony on this track, and Chris Whiteley is featured on harmonica.

RON PAUL MORIN - MAGDELENA RIVER SONG (CAPAC)
I think very highly of this man’s lyrics. The craft of songwriting is often overlooked when listening to music these days. Her we have a writer who has learned his craft extremely well. Look for a solo album sometime in the next year.

LISA GARBER - OVER AND OVER AGAIN (Colgems-EMI) (CAPAC)
This session with Lisa is the closest we ever got to pop music on Touch the Earth. The folk idiom seems to have been a training ground for many of todays better pop writers and Lisa Garber is no exception.

DAVID WIFFEN - COOL GREEN RIVER (PROCAN)
Watching David Wiffen perform makes it all look so easy. He is unquestionably one of the best songwriters and singers around today. Cool Green River is one of David’s more recent songs, and is recorded here for the first time.