Woods, Donovan - The Hold Up 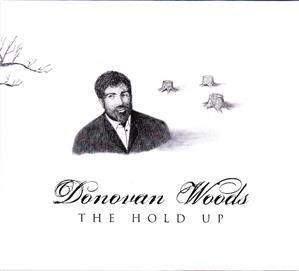 Maybe his given name was the shove that got the ball rolling. Whatever the fateful forces at work here, destiny has been blazing the trail of up-and-coming southern Ontario singer-songwriter Donovan Woods. Named after legendary musician Donovan Leitch, Woods was introduced to folk music at an early age. “We’d listen to Arlo Guthrie, Canned Heat, or Paul Simon for hours. In the beginning I hated it, hanging out with Dad, but now I wish I could go back and hear what we were getting into”. Music with solid roots would best describe the work of this well-rounded young talent.

Though he has been living and writing in Toronto for 4 years, Donovan grew up singing with his local church choir in Sarnia, Ontario. He began playing both the guitar and the piano at an early age. His sustained devotion to both instruments becomes obvious upon experiencing a live or recorded version of any one of his songs. Like little tableaus, they display the commitment of family life and the understated romanticism of blue-collar towns, making picture-books of the extraordinary aspects of ordinary lives. Donovan presents to us the brilliance of cold hard realities -- including the melancholy that can result when you grow up and make a move to the big city.

There is a sophistication and transcendence to this modern take on traditional folk. Identification with his lyrics is easy; his optimism gives hope to the lovelorn, the love lost, and even (as one so rarely finds in singer-songwriter classics) to love found. Within his work, the human will to “make right” prevails through all trials. “I want to write songs that stick around. Solid songs that age well. A lot of songwriting these days is cheap. I’m trying to write the expensive stuff; the stuff that only comes out when there’s company coming”.

In his songwriting, Donovan firmly believes in simplicity, something he attributes to recently touring with The Andy Kim Band as a guitarist and vocalist. After being handpicked by Andy Kim himself, Woods joined the band in a national tour in 2006. Working and touring with the writer of American classic song, ‘Sugar, Sugar’ had a profound influence on Donovan, and resulted in the release of his first studio album, “The Hold-Up”.

Since its release in June, the album has received critical and public attention within Canada and the United States, resulting in praise from respected indie music blogs such as iguessimfloating.com, and ‘the ANTI-HIT LIST’. Word of mouth coupled with this internet buzz led to airtime on the CBC, where his songs were included in regular rotation. Having a song with such atmospheric national pride as “My Cousin has a Grey Cup Ring” in his repertoire hasn’t hurt him, either. For two years (and counting) the song has been broadcast in its entirety during CBC’s televised coverage of the Grey Cup. It has also been nominated for a 2007 CBC Bucky Award.

Woods has successfully started a career as an artist who sings for and about life in Canada. The driving rhythms from his guitar are evenly matched by his vocal testimony in songs like ‘Once a Week’. In ‘Car Won’t Start’, we find a gentle piano chord in perfect symbiosis with a soft and almost lullaby-like acceptance of misfortune. At once endearing and inspiring, these songs move. Donovan is a lyricist with wit like Ryan Adams, the movement and attitude of Elliot Brood and the good sense of Ron Sexsmith.

Donovan has always been clear about his ambitions, he wanted to sing, and to write his own songs, with his own guitar. He did. He wants people to listen, and they do.