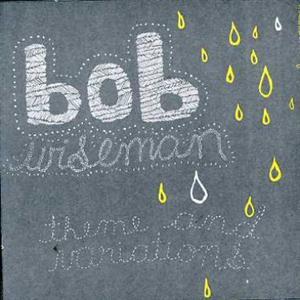 Album from former Blue Rodeo keyboardist/organist. He's since travelled in much different company, being a member of Toronto legends Slutarded, local grunge band The Hidden Cameras and playing with the likes of Michael Snow and Paul Dutton.

Bob Wiseman has always been well known for changing his musical identity -- and Theme and Variations may be the truest incarnation of that chameleonic search for identity he has yet released. Opening with the aptly titled "Who Am I," Wiseman croons over discordant tones, "I wish I could remember my name/I know it begins with a 'B'." If you're a fan of Bob Wiseman's, this is a great album. There is just no other way to describe the music of one of pop's most idiosyncratic writers and performers.

Ever since City of Wood and Accidentally Acquired Beliefs, Wiseman has been moving farther and farther from the mainstream, incorporating unusual time signatures, unharmonic melodies, and unusually quirky lyrics. If the "theme" here is "Who Am I," the "variations" are only odder. The second track, the nine-minute "Man of Misery," offers one possibility as to who Wiseman might be in an unusual anecdote, while the following "Search the World" offers, "I am a car/You can drive me." It's unusual stuff -- even by Wiseman's standards -- but it also may be the most introspective and revealing album Wiseman has released since City of Wood.

Fans will find lots of hints and in-jokes, while casual listeners will probably wonder what manner of bizarro experimentalism they have stumbled across. Again, if you're a Wiseman aficionado, this is probably the best Wiseman album in 15 years -- and it gives one great hope for where he will go with this. A bonus track, entitled "Where Is Sheila?," is added for fun -- starting off with a dialogue between a doctor and a nurse analyzing test results and debating whether Wiseman is indeed a "singer" or a "songwriter." (Again, another little private in-joke.) Wiseman spent the summer of 2008 opening for Feist in Europe -- and his brand of oddball melodicism certainly would mix with fans of his fellow Canadian, so one can only hope Theme and Variations helps spread his legacy around the globe.

Wiseman may be a niche artist -- but to hear the greatness in Theme and Variations (though it may take an acquired taste to hear it), one wishes the Canadian cult musician would become as easily accepted as a Tom Waits on an international level. If Wiseman can meld the musical brilliance of Theme and Variations with the commercial accessibility of City of Wood, he'd be well on his way to an international fan base and the respect that would bring.
-Tomas Mureika