Wiley, Nathan - The City Destroyed Me 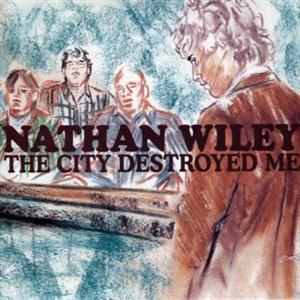 The City Destroyed Me

Nathan Wiley is a musician with a vision. And that vision comes into sharper focus than ever on his third album, The City Destroyed Me, a collection of thirteen tracks penned over a solid year of writing by Wiley, culled with the aid of his producer, Steve Berlin.

Hailing from the Maritime town of Summerside, PE, Wiley first earned acclaim for his 2002 debut Bottom Dollar, picking up an East Coast Music Award (ECMA) for Alternative Album of the Year in the process. He made good on the promise of that release with the ECMA-winning follow up High Low two years later. His blend of classic sounds with a modern, slightly world weary perspective struck a chord with listeners, as songs full of subtle melodies and lyrics addressing those unquenchable yearnings inside all of us wormed their way into their ears.

Now on The City Destroyed Me, Wiley’s two-sided persona of small-town-boy-meets-big-city-desire-and-despair grows a few more sizes, painted in the extreme colours of the title track, the peep show pitch of “Sick Side” and back alley funk of “Needle in the Groove”. They’re all part of the jigsaw piece pile of material Wiley had amassed since High Low. “I sent Steve forty or fifty songs, and kind of let him decide what kind of direction we should go in, what kind of record we should make together,” says Wiley. “His lists started coming back, concentrating more on the darker material, so that’s the direction we went in.

“For whatever reason, he leaned more towards the shadowy side. I was surprised by some of the choices, but once I started to see the songs from his perspective, I could tell he had a real interesting idea of a record in his mind.” Berlin is no stranger to dark and weird. From his early days in the L.A. punk scene through his ongoing career as sax and keyboard player for acclaimed Latino band Los Lobos and the cinematic sound of the instrumental combo Tuatara, Berlin has been involved in music grounded in integrity, but with an eye on the edge.

And as a producer, he’s helmed projects by iconoclastic groups ranging from Faith No More to the Tragically Hip, and singer-songwriters like Rickie Lee Jones, John Wesley Harding and Michelle Shocked. Clearly, Wiley was in good hands as the pair took over Halifax’s The Sonic Temple recording studio for a few weeks in the fall of 2006.

“It was a really unique songwriter’s sensibility,” says Berlin of his first reaction to Wiley’s demos, “and I heard a lot of possibilities, most of which we were able to explore. I heard a bit of dub in some of the stuff, and we kind of went after that a little bit. I had an idea for a really different kind of record. And I think it actually turned out to be all that and more. A lot of people I work with tend to have a really defined palette by the time I get to work with them. People seem to find a groove they’re happy in and stay there, but I like to go exploring. Right from the first, Nathan and I both had this idea that we would just go exploring and anything was fair game.”

Unlike some name producers who merely graft a commercially proven sound onto an artist’s material, Berlin took Wiley’s songs for a drive around the block to see what fit them best, building a steamy soundscape of screaming guitar and distorted vocals for the potboiler “Big Brother/Cruel Father” or keeping the light-hearted ukulele coda from the demo version of the consumerism tirade “North American Dream”.

To add the sonic frosting to Wiley’s bittersweet concoction, Berlin suggested Vancouver mixing whiz Mike Fraser, whose hard rock resume includes acts like Mötley Crüe, Metallica and AC/DC. Perhaps those aren’t acts you’d associate with a soft-spoken Islander with the glint of sin in his eyes, but Fraser fell in love with the songs and was firmly on the side of giving them some extra teeth at the west coast capital’s Warehouse Studio.

Taking the tracks to Vancouver also made sense due to the fact that Wiley’s years there as a musician prior to moving back east continue to leave their mark in his music, including the title track of “The City Destroyed Me”, which may provide a few hints about his departure. That song, and many others on the record, from the opening track “One of the Worst Ones” to the pastoral “Graveyard”, address themes of destiny; the parts of your fate you can control, and those which you can never escape.

“I think it’s subconscious; I try not to think too much when I’m writing, and then after some time I’ll go back and look at it again and see which ideas keep reoccurring,” says Wiley about the common threads running through The City Destroyed Me.

“There’s a lot about fate in there for sure. Sometimes I feel like everybody is on this path that’s tough to change, and that can be kind of scary depending on what path you’re on. It’s definitely a subconscious theme, but certain lines and images keep creeping up on you.” For Wiley’s part, his musical Magic 8 Ball says all signs point to yes when asked about his future as one of Canada’s most gifted singer-songwriters, but he’s not about to let fate do all the work.

“The longer I do it, the more I can get into it,” he says. “I haven’t had a day job in ages, and when I gave that up it was in order to make song writing a full time thing. I think I just pushed myself in that direction and when it came time to do a third record, there was the option of doing it right away, or waiting until Steve was available, and we made the decision to wait. The record could have been out earlier, but I wanted to work with Steve, so I just kept writing during the down time, and the songs kept piling up.”