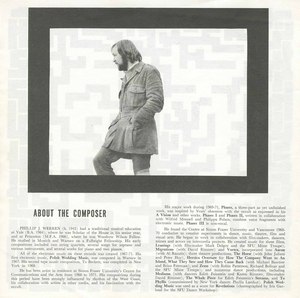 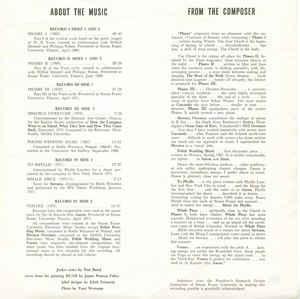 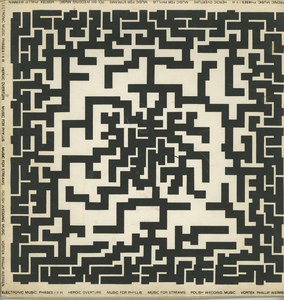 In 1971 Phillip Werren released a 4LP box through Simon Fraser University of his early Electronic Work which was recorded at S.F.U., McGill University & Radio Warzawa, Poland. Only 100 copies where ever made. A few years ago I discovered this record and was completly blown away. The Lp has heavy elements of tape collage, Modular Synthisis, voice, and experimental thought. Some of the pieces where conceived by psychedelic and occult influences. Much of the record was done with a Buchla 100 Series,the first of their modular synthesizers. I tracked down Phil in Toronto where's he's been living a number of years. Phil taught music composition and theory at York University in Toronto from 1977 to 1997,where he headed York's Electronic Music Studio.

The Album was created for the most part at the height of the late 60's at Simon Fraser University. "1968 was a year of great upheaval: at SFU, Canada's Berkeley, 114 people were arrested for their part in the protest over the firing of the entire faculty of the Political Science and Anthropology department. Marcuse, Baba Ram Dass and others came to speak to us at peril to themselves; acid and mescaline abounded and apocalypse seemed to fairly shout out at us in the rarified atmosphere of Burnaby Mountain. The neo-fascist architecture of the university seemed to beg for anarchy and chaos and linear thought itself seemed doomed to extinction."

"The electronic music studio at SFU was at that time probably the most sophisticated studio in Canada. After working in studios at Columbia and Radio Warsaw, both of which were small and somewhat limiting, I found it impossible to continue composing with the Princetonian precision in which I had been schooled. The SFU studio contained the most recent synthesizer designed by Don Buchla. I only vaguely understood what it did and realized that I would have to put aside my rigid preconceptions of how one sound should follow another. The sequencer, a device which can generate a sequence of sound events in a more-or-less random pattern and at times seemed to have a life of its own, became for me a sort-of window through which I could see/hear a universe of sound I had never imagined possible. It was necessary for me to Òstep backÓ from these sequences of sound-events, to control them in some other way: through the mix of one sequence with another in time and space."

This album is a nugget of Canadian Psychedelic Avant-Garde history, up there with the early works of Bill Bissett, The Nihilist Spasm Band, and Intersystems. Also in line with early America works by Robert Ashley, Tod Dockstader, and Gordon Mumma.

Phil and his Engineer friend Tony Crea have transfered the original tapes to digital and cleaned it all up for this CD reissue. Original artwork on the cover was created by local Vancouver Artist JAS Felter.

only 100 copies of this 4LP box set were ever pressed. I have uploaded a few tracks that do not appear on the cd re-issue.