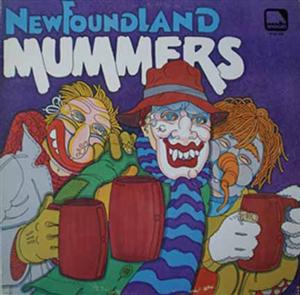 This album was endorsed on the back by Joe Smallwood in Conception Bay. Here is what Joey Smallwood had to say: A very talented Mummer asked me if mummering and jannaying meant anything to me. I recall the days before television when Radio wasn't too good, but provided the only source of entertainment other than School concerts or the odd dance. From December 26th (Boxing Day) to January 6 (Old Christmas Day) the mummers came in their disguises made of old flour sacks and other get ups that made for a guessing game. Dancers, musicians young and old, came to the door offering live entertainment at its best. Here in this album are Mummers hoping to jog your memories while getting you into a good mood for the New Year. It should bring a smile to your face while spreading happiness around Newfoundland-style.

The back of the album goes on to describe the history of Mummering in Newfoundland. “The origin of the mummers has been traced back to England and apparently began over 800 years ago. Since then it has branched out to France, Ireland, U.S.A. and Canada. In Canada it is most prominent in Eastern Quebec and Newfoundland. Mummers are generally seen each year from December 26th to January 6th and if one should knock at your door do not be frightened by his costume, but instead, invite in and have a party. Tradition is for mummers during this period to go through the town knocking on doors and having parties of singing and dancing. In some areas parades are held and are noted for their outlandish costumes. This album tries to capture the feeling of mummer party somewhere in Newfoundland. We hope that mummer Chuck, mummer Don and Mummer Reg and all other mummers including our good friend Bill Lewis will brighten your day and serve as the greatest gift that you can give a relative or friend."

The album was recorded at Snocan Studios, Ottawa. Produced by Ron Sparling and Reg Watkins.