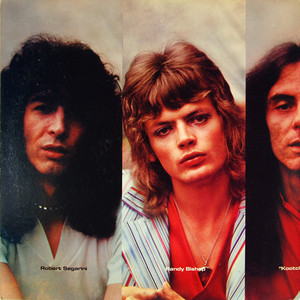 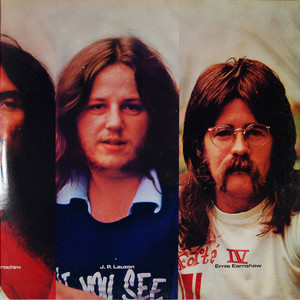 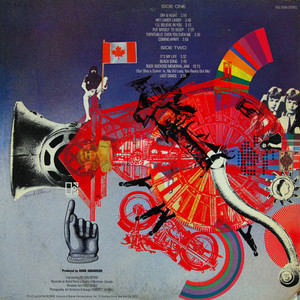 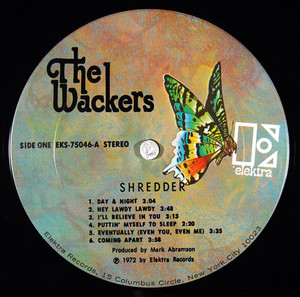 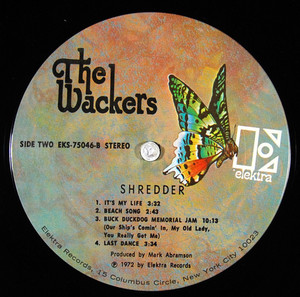 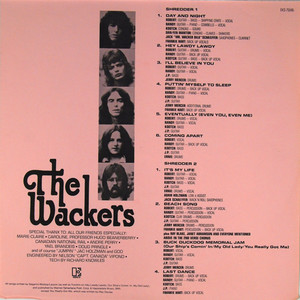 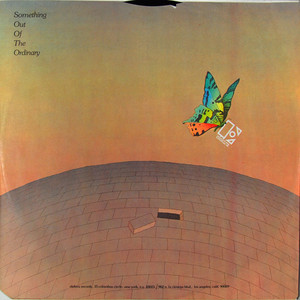 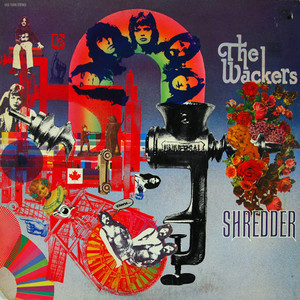 More than their two previous albums (also available as CD reissues on Collectors' Choice Music), Shredder captured some of the freewheeling energy of the Wackers, a band that flew in the face of early-'70s trends by taking their inspiration from the concise pop-rock of the British Invasion era. Ironically, however, it wasn't even intended to be a Wackers album when it was first conceived. Perhaps even more ironically, a subsequent attempt to capture the actual Wackers live sound on LP came to naught, helping lead to the demise of the band in 1973.

Although the Wackers had formed in Northern California, they moved to Montreal after recording most of their second album, 1972's Hot Wacks, in the city, returning to play an enthusiastically received two-month residency at the Mustache club. Shredder started out not as a Wackers album, but as a side project for Bob Segarini and Randy Bishop, who had done much of the writing and singing on the first two Wackers LPs. Calling themselves the Incredible Duck Brothers, they were joined in the recording by Wackers bassist-guitarist Bill "Kootch" Trochim. Segarini had studio time at Wally Heider's Studio in San Francisco, he explains, "and we went in and did some little acoustic things. There were three or four songs we did, sort of mellow stuff. Everybody was enjoying this." After getting a go-ahead from Elektra president and founder Jac Holzman to do a full album, he continues, "I said, 'I want to go back to Montreal and finish this.' At the end, Elektra was so knocked out by the songs they flew [Wackers drummer] Ernie [Earnshaw] up, and we finished the album as the Wackers. So, so much for the Duck Brothers. But that's why it really leans back to the acoustic days, 'cause that's how it started out."

Producing the album was Mark Abramson, who'd been working on Elektra sessions since its days as a primarily folk label in the late 1950s. "Mark was the sweetest guy I think I ever worked with," says Segarini. "He was also Judy Collins's producer, and this is when we really went into the sort of acoustic thing. Half the drums on that album are played by me on a snare drum with a hole in it, a sheet of paper on a phone book on a barstool with a wire brush, and one cymbal." There was also a change in personnel within the band, as founder-member and fellow singer-guitarist-songwriter Michael Stull "left to be a technician and get into Da Blues," Segarini told Gary Sperrazza and Lester Bangs for a Wackers feature in Shakin' St. Gazette. "I got him to play Rickenbacker 12-string funky leads and he hated to play them; he thought it restricted his blues playing and fast licks. But I give a big fat fuck about fast licks. Gimme a Badfinger solo anytime as opposed to a Mahavishnu solo. I find that redundant and boring at the same time." J.P. Lauzon took Stull's place on the album, with Jerry Mercer helping out on drums; Mercer had been in the Montreal band Mashmakhan (who had a Top Forty hit in the US in 1970 with "As the Years Go By"), and would later join the popular Canadian group April Wine.

The loose nature of the project spilled over to the sessions themselves, which were graced by some very famous guests who didn't make it onto the album credits. "We were there for about six weeks, and Monty Python was doing their first North American tour," remembers Segarini. "They were in town for like two weeks. Because we were a big deal in Montreal at the time, they showed up in the studio one night -- John Cleese, Eric Idle, Neil Innes [the ex-Bonzo Dog Band member who toured as part of the Python's stage show], and Michael Palin. Cleese came by a few times, he was always really fun. But Eric was there all the time. And because they're hanging out, everybody starts hanging out. Frank Marino from Mahogany Rush, whose first album I produced. Brian Greenway from Mashmakhan, who I eventually formed a band with; he's been in April Wine for the last 25 years. Frankie Hart, a singer in a well-known local band, sang the backup vocals on a couple of tunes.

"All the sessions was just a long party. I mean, what are you going to do with Eric Idle and John Cleese sitting in a room, cracking jokes? And the same thing with all the other musicians coming by. 'Cause, you know, the booze was flowing, the drugs were flowing. It was a very relaxed time. We were sort of at our peak, confidence-wise. We could have rented a real set of drums for the record, but we never bothered. Even when Jerry's there, he's playing on a stupid piece of shit drum kit."

The album did yield, at long last, a hit for the Wackers in "Day and Night," though it would be a much bigger hit north of the border than in their native country, getting only to #65 in the US. According to Segarini, the single "was huge in Canada, and broke into Billboard in the States thanks to CKLW [which broadcast into Detroit from just across the border in Windsor, Ontario] in the Midwest; a program director named Rosalie Trombley broke that record in the States. Because we didn't have representation down there and we were up here, we never pushed that record into the Top Fifty. But it was a great song. 'Day and Night' is credited to Bishop-Segarini; Randy came up with the guitar riff, but I wrote the song."

Adds Bob, "The track for that was cut at Wally Heider's, during the Duck Brothers sessions. I don't even know if there's a set of drums on that track. I'm playing the packing crates that the instruments came in, and tambourine, shakers, maracas. That was just stuff we did without a click track at Wally's, with two acoustic guitars. Then we had Jack Schaeffer come in and do the 'Mr. Wacker Bilk,' brought him back for the horns in it. I always thought the coolest thing about 'Day and Night' was the fact it has a clarinet solo at the end of it." Asked if he has some other favorites on the album, Bob adds, "I love 'I'll Believe in You.' I think [it] is a tremendous piece of music. It's a little simple sort of throwback to 1965. It sounds like John Lennon and David Bowie doing a duet on an old Beatle record."

While Segarini enjoyed "the laissez-faire sort of campfire goofing around" vibe of the sessions, he wasn't sure it was right to use "Buck Duckdog Memorial Jam" on the final LP. "Mark insisted on putting 'Buck Duckdog' on there, which was just literally a jam, goofing around. Then I went and put words in places. It was just us playing in the studio, and he really liked it. I've always thought it was kind of a misstep that that was even on it. We had three or four [other] tunes in the can; they were great Wackers songs."

After its release, Shredder got some positive feedback in Rolling Stone, where reviewer Ben Edmonds observed, "With rock'n'roll commanding so much of the action on Shredder ('Hey Lawdy Lawdy,' 'It's My Life'), even their acoustic material packs a punch, and may in fact provide the album's most enjoyable moments. These are rock'n'roll ballads, not whimperings from some Marin County sickbed...On 'Last Dance' you can almost envision Ray Davies and David Bowie in starchy prom tuxedos, waltzing across the floor for the final time. Randy Bishop's vocal is overly affected, but works perfectly in context. The song is a caricature, its features consciously distorted for emphasis and effect. At the heart of the Wacker ethic is an unmovable commitment to fun, even should it take the form of mild self-parody."

But Shredder, like their previous two albums, failed to make the charts. As Segarini tells it, "After that, we wanted to do the album we always wanted to do. We wanted to rock harder, three-part harmony, kick some ass. And we went in with Mark to do an album called Wack and Roll." A press release from June 1973 disclosed that five tracks for the projected LP had already been recorded live in Westport, Connecticut, and that students from high schools in the Montreal area had been invited to take part in the cover photo, the tentative concept being a picture in which the Wackers would be "surrounded by hundreds of teenagers in a school playground." According to another press release from May of the same year, the album would have included live-in-Westport versions of "Queenie," "I Started to Rock," and "Teenage Love," and was scheduled to come out in July 1973. Mark Abramson was quoted in that press release hailing the live material as "some of the finest pieces of recording I have ever heard." And Bob Segarini told Shakin' St. Gazette, "When we originally came up here to do Wack and Roll, we had already recorded the demo right after Hot Wacks, consisting of 'Rock and Roll Circus,' 'Teenage Love,' 'She Loves You,' Randy's 'Old Mr. Hard Times' -- all uptempo, rock'n'roll songs. And we played them for Elektra promotion head John Davis, who was jumping up and down shouting 'I've finally got a rock'n'roll band.'"

For all the effort and planning, however, as Bob sadly recounts, "Elektra rejected the record. They rejected the monitor mixes; it never even got mixed. We finished the album just as Jac [Holzman] left, sold Elektra, and we were running out of steam. So the Wackers broke up. You can find a cassette of the Wack and Roll album from collectors now for $700-$1000." Segarini and Trochim did do one additional Wackers single with three new members for Canadian Polydor, but soon they had formed a new band, All the Young Dudes, who put out an album for CBS. Now based in Toronto, Segarini's kept busy performing, recording, and producing with various bands over the last three decades, as well as working as a radio DJ, TV producer, actor, and voiceover artist. Randy Bishop went on to a solo career and is now based in Nashville, enjoying success as the co-writer of Toby Keith's huge 2001 country hit "My List."

"I think our timing was five years too early, or five years too late," Segarini remarks when asked why the Wackers never made a big commercial splash, despite gaining fans among some of the day's leading rock critics, and despite making music with a very commercial pop-rock approach. "I think the Wackers albums are full of hits. But it's really not important. It wasn't even important at the time. I don't remember ever hearing anybody say, we don't have a #1 record, so we suck. We were always working, we always saw full houses, we always were in the studio, pretty much. It felt good to us. Had Elektra understood what the Wackers were, I think we would have broken ten times bigger than the Raspberries ever did. But they didn't."
-Richie Unterberger (liner notes)