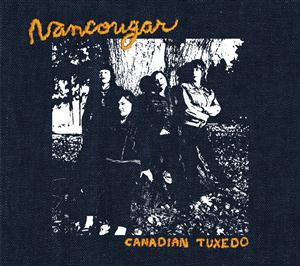 To anyone outside of Canada who casually glances at the new Vancougar record, you might dismiss the cover without too much thought. It almost comes off as a bit generic; a bit too similar to the classic records that litter every punk rockers collection.

But when you take a closer look, it's fitting that the Ramones style black and white cover is shot against a big tree (as opposed to a gritty street backdrop) and instead of a bunch of ugly dudes, Vancougar is "all girl." And with those two simple realizations, the seemingly innocuous cover really set the tone for the band. The four girls from Vancougar are all about big guitar riffs, but they are more playful than snotty and even as rough as East Van gets, it's still beautiful.

All of those little things are great, but the thing that really made me smile was the title. The Canadian Tuxedo is a tradition that we can't seem to shake, as day after you see people rocking a fresh pair of denim with a (possibly matching) jean jacket. Yes, Canada seems to favor the denim destroyer, and although this has nothing to do with the review, but I just thought the girls deserved some kudos for the title.

Anyway, back to the record. Driven by the vocals of Eden Fineday - who I guess would play Riff Randle in this tale - and backed by CC's solid drums, Megan's shimmering vintage keys and Becca's fuzzy bass, Vancougar manages to jump between garage, 90's indie, and even toss in a ballad or two ((I Hope Your) Money (Keeps You Warm)). But the band does best when they crank up the energy, amps and distortion like they do on the catchy lead single Obvious. Eden's crystal clear vocals contrasts the huge sounds and makes for a catchy jam that transitions perfectly into the swirling, crunch of Vanity. With hand claps and ahhhhhs, Vancougar really hits on that pop punker sound that the Donnas used to be so good at.

They mix in elements of folk (the intro of the heavier Let it Go), but the goal of the record is making sure you have fun. Even on the 60's themed, slow dance paced Money, hearing Eden admit her rich man "can go to hell" is like a Pretty in Pink anthem for the new millennium. All too often, bands take themselves too seriously and strip away enjoyment from records like this, but Vancougar - like the name suggests - would rather see you smile than sneer. Works for me.
-herohill