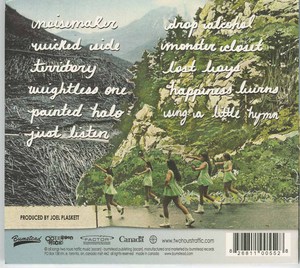 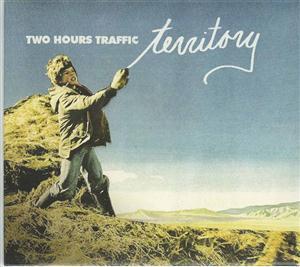 Those who pick up the latest Two Hours Traffic album in the U.S. might be wondering about those strange logos on the flipside of the CD case: the Government of Canada wordmark and a logo for an organization known as FACTOR. These happen to be two bodies where Canadian bands can turn to get money to make albums in lieu of usually not being able to raise the funds on their own. Those outside of Canada might not know this, but there’s a whole system of government and organizational subsidies available to Canadian acts to enable them to make music in their home country, without having to unhitch their tent and move to the States just like Neil Young and Joni Mitchell did in the 1960s in order to get heard. It’s a complicated system, one that takes into account the wide geography and population dispersal of Canada (which makes it a harder country to tour coast-to-coast and get the word out and make money that way, for instance), not to mention the country’s proximity to the world’s biggest cultural exporter, America.

However, the system comes not without its share of controversy in the Great White North. Last year, FACTOR, which receives public funding, made headlines in the National Post when Unfamiliar Records founder Greg Ipp wrote a letter, which was later republished on the Internet, alleging that bigger Canadian acts with a bit more financial footing shouldn’t be getting the lion’s share of the organization’s grant money as it leaves lesser amounts for up-and-coming bands. What’s more, the Government of Canada, under the current Conservative government reign, has, in recent years, rethought its position in providing taxpayer money to funding what it deems to be questionable acts. In 2008, the government killed the $4.7 million PromArt program, which sent artists abroad to promote Canadian culture, because some of those who got government money were deemed to be too eyebrow-raising. One of the bands who were funded for a promo tour and raised the ire of the government was Toronto experimental band Holy Fuck, whose name, the Conservatives felt, wasn’t helping to put the country’s best foot forward.

So where does this leave Two Hours Traffic? In the eyes of this reviewer, there was the perception that the band—which was formed in the tiny provincial capital of Charlottetown in Canada’s smallest province, Prince Edward Island—wasn’t good enough and had to resort to government funds in order to make their records. (Considering I’ve received grant money for my art, I’m one to talk, but, with smaller bands, I get a little leery when I see that Government of Canada wordmark on the CD case, as many middle-of-the-road acts, in my mind, have received taxpayer’s money—Bedouin Soundclash, anyone?) With the arrival of the band’s third and latest record, Territory, in my mailbox, I was genuinely surprised to learn that this was a misconception once I slipped the disc into my CD player. Two Hours Traffic, which takes its name from a line in Shakespeare’s Romeo and Juliet, crafts some highly delectable power pop, citing Nick Lowe as a major influence, though Territory certainly draws upon other sources as well.

The album has been out in Canada for exactly a year, and was even reviewed in capsule form on this website upon its initial release. However, it is worthy of a revisit, considering that the album is now getting a proper U.S. issuance, complete with four bonus tracks culled from 2007’s Polaris Prize nominated Little Jabs. Which begs the question: Why didn’t the label just either re-release that album stateside or offer it up in its entirety as a bonus disc, considering its positive critical reception north of the border, not to mention the inclusion of some of its songs on American TV shows like Gossip Girl and Smallville?

Territory opens up with the raucous “Noisemaker”, which is an infectious bit of jangle pop that veers a little bit into pop punk, well, territory. The only knock against this opening salvo is that, for being a power pop anthem, the guitars seem a little buried in the mix and the song, as a result, doesn’t quite reach out of your speakers and deliver a knock-out blow upside your head like it otherwise has the ambition to. Perhaps partially to blame is long-time Two Hours Traffic producer Joel Plaskett, who is a Canadian musician in his own right, maybe most famously associated with the ‘90s alternative rock quintet Thrush Hermit. Having worked with such mainstream Canadian bands as Great Big Sea, Plaskett has a bit of a reputation for being a pure pop progenitor in his later years, and, in his attempt to give his progeny a well-varnished radio-friendly hit, kind of amps down the muscle of the song. However, a more positive aspect of his influence is felt on the follow-up cut, “Wicked Side”, which has a real Jackson Browne / ‘70s Laurel Canyon singer-songwriter feel. Vocalist Liam Corcoran even sounds a little like Browne in his delivery, and the tune has a polished AM-gold vibe to it, thanks to some tasty keyboard work by Alec O’Hanley.

From there, Territory veers between Big Star-influenced power pop and slightly more plaintive piano-driven mid-tempo scorchers like “Weightless One”. The record does throw the odd curveball here and there, such as “Lost Boys”, which, surprisingly, has a folksy, countryish-tinge to it, so much so that it wouldn’t feel out of place in the canon of Blue Rodeo. The CD’s final cut, “Sing a Little Hymn”, even has a gurgling bit of electronics underscoring the song, as though it had been lifted straight out of Phil Collins’ “In the Air Tonight”.

Lyrically, the album veers a bit on the darker side of relationships, which is evidence by the very first words uttered on “Noisemaker”: “Maybe I should explain why I’m building a cage.” Thankfully, the words don’t veer into the kind of opaque randomness that seems to characterize a lot of Canadian indie music that I’ve heard lately. (The Acorn and Wolf Parade, I’m looking at you.) These are songs about being young and in love, though that love is fraught with distrust and possible betrayals of loyalty. (“Caroline / You say you don’t like the beach / And that is fine / But there’s sand in your sheets.”) My personal favorite is “Drop Alcohol”, which is basically about picking up a drunken girl at a bar. What white-bread collegiate Canadian male can’t relate to that?

The Little Jabs portion of this reissue of Territory is strong, and it’s easy to see how the album got a Polaris nod. “Heroes of the Sidewalk” is a delightful rocker led by an acoustic guitar that has a roots rock feel to it. “Jezebel” offers soaring, almost Brian Wilson-like background vocals. “Nighthawks”, which was a single from the album, is a driving tune about “poseurs who just don’t quit.” Finally, “Backseat Sweetheart” could almost pass for a Cars song, with its squelchy keyboards.

If Territory has any failings, it’s that many of the songs seem to merely peter out and quit, instead of finishing off with a grand flourish. The album seems to come across as a little half-baked as a result at times. Still, there’s some strong songwriting and undeniable pop hooks that will keep you glued to your stereo system. It’s a fun record, while not entirely groundbreaking or earth shattering. What’s more, it was funded in part by Canadian taxpayer money, which means that someone with connections to the government thought that this material passed muster. Maybe that’s a backhanded recommendation, but consider Two Hours Traffic’s Polaris Prize nomination before passing judgment. What more of a recommendation do you need than that?