Tiller's Folly - A Ripple in Time 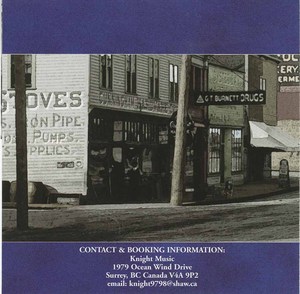 Tillers Folly - A Ripple in Time A Ripple in Time

"Ripple in Time" has just received the top CD of 2001-2003 award in the Acoustic Ensemble Category from the Indie Acoustic Project!

"Grounded and influenced by Celtic Music, the mists of Canadian history, and decades of musical experience between them, Tiller's Folly's new album "A Ripple in Time" is an extraordinary effort by an exceptional group. In this age of fastfood music, even in the folk field, thank goodness for the music of Tiller's Folly...songs written with respect for tradition and history, played with virtuosity and gusto, that are both fun and thoughtful."
- Tom May Producer/host "River City Folk"
WFMT Fine Arts Radio Network, Cbicago

For over eight years, The Tiller's Folly have been wowing audiences in Western Canada and throughout the United States with their superb musicianship, ultra high energy performances, and riotous songs about The Pacific North West's own colourful past. The band's exceptional musicianship, versatility and passion have won them the loyalty of many fans who appreciate the band's clever amalgam of Celtic, bluegrass, and folk music laced with a touch of country and rock. Saturated in deep Pacific brine, this is roots music at its best.

The Tiller's Folly is the brainchild of acclaimed acoustic-roots singer-songwriter, Bruce Coughlan, noted for his work with the Bare Facts, the Hightops, and his own solo recording Any Day Soon. Coughlan was touring pubs and clubs around British Columbia, Canada by the time he was 16 and points to this period as the root of his interest in western history. Traveling the province on the income of a young musician, he sought out cheap entertainment in the local museums and libraries in the towns where he stopped. He also loved getting to know the locals and hearing their stories of days gone by. By early 1996, Coughlan had visions of creating a Folk/Celtic band to put those stories to music. He assembled some of the West's most respected players and Tiller's Folly was born.

The group's third and most recent CD, A Ripple in Time, features high-energy odes to John Tod, a weathered Hudson's Bay trader, and Andrew McCulloch, the man behind the Kettle Valley Railway, to name a few. Also in the mix are a couple of collections of jigs and reels and a couple of tunes with no real connection to history at all, like the full-throated rocker, Water at the Bar, a good-natured stab at those who drink water at the bar.

The current Tiller's Folly line-up features Coughlan, Laurence Knight, Nolan Murray and Eric Reed. Murray is a California fiddle and banjo champion and Top 10 finisher at the Grand Master Fiddle Championship and US National Fiddle Contest. He has recorded and toured with Loretta Lynn, Ferlin Husky, Ian Tyson, David Frizzell, Brenda Lee, The Irish Rovers, Randy Travis and many of today's top Canadian country stars. Laurence Knight also has a long and varied musical resumé spanning some 30 years of recording and performing. He has played with everyone from Bo Diddley and the Sun Rhythm section (Elvis' first recording band), to the Headpins and members of Prism, Heart and Loverboy.

Together, The Tiller's Folly have played hundreds of fairs, festivals, concerts, schools and special events in Western Canada, Washington, Oregon, Idaho, and Nevada. They have appeared on NPR's River City Folk program (syndicated on over 200 US radio stations) and receive regular airplay on over 30 US radio stations and over 100 others in Europe and Australia. And Sing Out magazine recently proclaimed that Bruce Coughlan "besides writing some lively glimpses of history, has one of the best vocals I've heard in any male group."

With Coughlan's acclaimed vocals and impressive songwriting and the virtuoso musicianship of The Tiller's Folly line-up, a Tiller's Folly recording is a great time not to be missed!

For further information, including band member biographies and cuts from both "A Ripple in Time" and the band's other recordings, please visit The Tiller's Folly on the web at: http://www.tillersfolly.com