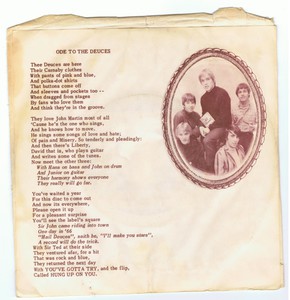 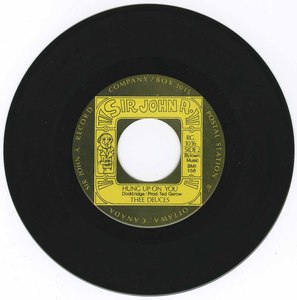 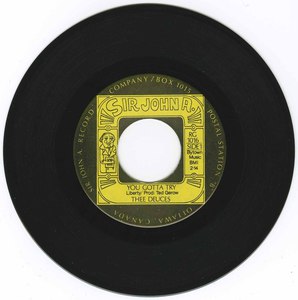 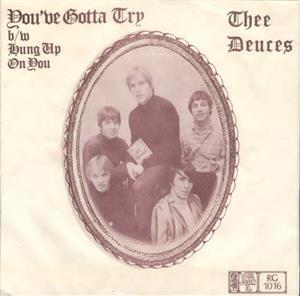 You Gotta Try b/w Hung Up on You (picture sleeve)

Originally from the small town of Almonte (about 40 km southwest of Ottawa), Thee Deuces started out as an instrumental combo in 1964. A forty-seven-week residence at the Inter-Provincial Hotel across the river in Hull, Québec allowed them to seriously hone their skills. In 1965, they relocated to Ottawa and acquired a manager in Don Billows, the owner of the Oak Door Club. It was also around this time that the band were approached by a Hollywood producer, who offered them a role in one of his teen exploitation movies. They had to refuse, however, when they realized that the deal required them to make their own way out west to California. The band signed on to John Pozer’s fledgling Sir John A imprint, which simultaneously released their ‘You Gotta Try’ along with ‘Low Man’ by Don Norman & The Other 4 on November 29, 1966.

Only 200 copies of this killer garage record were ever pressed, with the hand-pasted picture sleeve rarer still. The totally demented ‘You Gotta Try’, with its pounding beat, fuzzed-out guitar riffs and screaming monster vocals will blow your mind. This one interestingly enjoyed some chart success, reaching a respectable #86 on March 11th,1967, thanks in part to airplay on Ottawa area stations CFRA, CKOY and CJET – though the rather transparent Yardbirds references probably did it no harm either. Add to this, the electrifying seesaw guitar of ‘Hung Up on You’ over on the flip and you’ve got a double-sider worth every penny of its value.

The band later changed their name to the Heart, adding another Sir John A disc to posterity, ‘Treat Me Bad’ / ‘Help Me Down’. Both sides showed up on the fine retrospective CD Ottawa Rocks - The Sir John A Years.
-Robert Williston