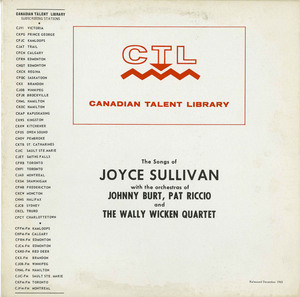 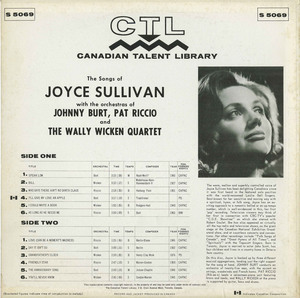 The Songs of Joyce Sullivan

SPEAK LOW – THE STORY OF JOYCE SULLIVAN
Joyce Sullivan is a seldom mentioned vocalist in early Canadian pop and jazz music history. She was part of the small illustrious class of classically trained female singers who came up in Toronto on radio, singing with orchestras and choirs of some of Toronto's more prolific conductors.

Joyce (Anna) Sullivan [Solomon] was born in Toronto on July 4th, 1929; to parents Gertrude "Gertie" and Joshua "Josh" Solomon. She grew up in a musical household and began singing at an early age.

She was born during the dawn of the infamous "Great Depression" financial disaster and was raised in the aftermath. Naturally, her family were conservationists, particularly her mother; reluctant to throw anything out that could be glued, mended or repurposed.

As early as nine, Joyce was singing at local weddings, bar mitzvahs and church services. Her parents enrolled her at the Royal Conservatory of Music in her teens where she trained under Italian Soprano singer Emmy Heim. She received a music scholarship from University of Toronto where she went on to study.

Around the time she turned eighteen years old, Joyce was invited to join the Leslie Bell Singers. She received steady work with the group over the next seven years; singing with them during concerts and on radio broadcasts as mezzo-Soprano. Her most known performance with the group was a 1951 radio performance of Pergolesi's Stabat mater. Her time with the Leslie Bell singers led to a chance meeting with her soon-to-be husband: actor/writer John "Jack" Scott. The pair were married in the early 1950's, bought a farm in Rouge Park, and had four children; Laura, John, Kate and Melissa.

In the early-to-mid 1950's, Joyce could be heard on a number of popular CBC radio musical variety shows, as well as Jack Arthur's "Mr. Showbusiness." She also appeared frequently on CBC's "Showcase" television show. She was asked to co-host the show with Robert Goulet from 1957 to 1959. Joyce was a natural in front of the camera and was an actress in her own right; appearing in Kraft Theatre (1947), Scope (1949) and I Spy (1955).

During the mid-to-late 1950's, she teamed up with classical baritone singer and voice teacher Charles Jordan [Jack Wiseman] (Born: Montreal April 3rd, 1915) to make a recording dedicated to Canadian folk music. The nineteen songs they recorded in 1957 for Toronto's Hallmark Records run the gauntlet of Canadian folk music.

At the dawn of the 1960's, Joyce was asked to host a new CBC radio show titled "Talk Of The Town." Her strength as a lead with Robert Goulet on Showcase made her a natural choice for this new show. Around this time, she also began singing occasionally with the Carl Tapscott Singers as a soloist.

The group had for years sang on their own CBC radio show and had released multiple albums. In 1961, Joyce was requested to sing by the Carl Tapscott singers for their Columbia Records Christian hymnal album "Great Hymns Of All Time." Joyce's brilliant voice was in equal company this time; a choir of twenty singers (a mix of men and women) accompanied Joyce through the twelve selected spirituals.

Joyce continued singing off and on with the group, live and on radio until 1964, when they were once again recording a batch of spiritual tunes; this time for RCA Victor. Over the few years they worked together, the line-up of singers had morphed and changed considerably. Originally a nearly two-dozen strong, mixed-gender, large choir, had now reduced to twelve men. The crown jewel of this new ensemble was of course, the addition of Joyce Sullivan on lead vocals.

In 1965, Joyce and the Carl Tapscott Singers parted ways. She was still working on radio and television semi-frequently during this period, and her clout in the industry meant that she had a selection of Toronto's top orchestras and conductors to work with. Around October of that year, she was convinced to record an album for Toronto's Canadian Talent Library label.

Joyce had become acquainted with famed Toronto conductor and band-leader Johnny Burt in the late 1950's, when the paired worked together in varying degrees on various CBC shows. By this point, Johnny was the music director for Toronto's Canadian Talent Library record label. This was a jazz/pop/classical (mostly the former) music label, founded by J. Lyman Potts in 1962, dedicated to promoting Canadian talent from across the country. The label was an early effort in the field of promoting home-grown talent here in Canada; nearly eleven years before the revelation of "Canadian Content" laws.

During November of 1965, Joyce teamed up with the orchestras of Johnny Burt, Pat Riccio and Wally Wicken to record her debut solo album "The Songs of Joyce Sullivan." Though none of these tracks were actually original songs, her interpretation of these timeless classics is nothing short of amazing. Joyce's warm, mellow and superbly controlled voice had delighted Canadians for years, where she was best known for her sensitive and moving approach to spiritual hymns and folk songs. Here, we're treated to a display of how her talents work in a romantic ballad/up-tempo-pop setting and the result is probably her strongest work. The selection is varied, as is the performance, with the three orchestras each performing four songs. From the stand-out opening "Speak Low" to the closing "You'll Never Know," these twelve songs show a vocalist at the top of her game, with musical backing to match.

During the latter half of the 1960’s, Joyce began to wind down her musical performances. At this point she was nearing forty years of age and was focusing more on family and life on the farm. She continued to perform on CBC Radio and T.V. semi-frequently with the rare live engagement, but had no plans of further recording. This changed in 1968 when Johnny Burt convinced her to record another record; this time for the CBC’s newly implemented “LM-Transcription-Series.”

Transcriptions were nothing new for the CBC; they had been doing them since 1947. But in 1966, the English Services Division of the company embarked on a program which was intended primarily to serve CBC stations and affiliates. The resulting "serious" music recordings were numbered and marked with the initials CBC-SM (mostly classical music); the light music recordings were identified with the initials CBC-LM (mostly jazz/pop/folk). The latter “LM-Series” assembled selected, well-known names in light music, jazz, and pop music in Canada.

Joyce recorded an album for the series in May of 1968, backed by Johnny Burt and his orchestra. Unfortunately as with her lone solo offering for the Canadian Talent Library, this CBC album was a Transcription recording; meaning it was only possible to hear the music on CBC Radio and was not available for commercial purchase. This is the contentious double-edged sword that many early Canadian jazz and pop musicians faced; one can record for these labels (CBC, CTL and one’s like them) for next to nothing, receive free promotion on the label radio stations, but couldn’t sell their records, and couldn’t broadcast them anywhere but the label’s stations.

With the passage of time, people forgot about these transcription recordings; even the labels who commissioned them. In many cases, the tapes no longer exist and the only prevailing documents are the vinyl LP’s themselves. Joyce unfortunately was not spared of this fate; the early folk recordings she did with Charles Jordan seem to be the only thing garnering any recognition, even still, very little.

Around 1970, Joyce decided to more-or-less retire from the business altogether. She left behind her a legacy of great music some of which is easier to find than others. For the lucky few who have heard her solo CBC or CTL albums, Joyce is an extremely talented singer who needed a chance to grow on a larger audience. Unfortunately, the poor handling of these transcriptions over the intervening decades has kept the better parts of her musical legacy a lofty secret.