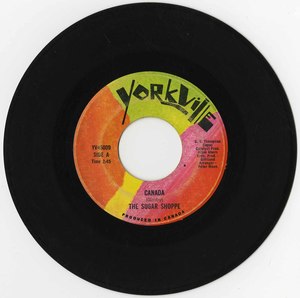 In 1967 Victor Garber tried a musical career when, along with Peter Mann, Laurie Hood, and Lee Harris, he formed a folk rock group called "The Sugar Shoppe".

At the time of the band's inception, Peter Mann had re-arranged Bobby Gimby's anthemic song "Canada" which the band released as its first single, in 1967, on Yorkville Records. The single was a big hit in Canada and promoted the band's name. Another single, "The Attitude", was released during that year and the band was heading to success.

"The Sugar Shoppe" signed with the Capitol record label and, in 1968, had two more singles, "Skip-A-Long" and "Privilege", and their debut and only self-title album.

Their last single, "Save the Country", was released by Epic Records in 1969.

The band's success led them to appear on television shows in Canada and the U.S. They made a guest appearance on the highly-rated CBC variety show "The Hart and Lorne Terrific Hour" and on the "Johnny Carson" and "The Ed Sullivan" shows.
Peter Mann and Lee Harris abandoned the band in 1969 and it was the end of the "Sugar Shoppe".

After the "Sugar Shoppe" disbanded, Victor Garber formed a new group called "The Shoppe", but it didn't match the same success. However, in 1971, "The Shoppe" had the opportunity to write and perform for the television series "Dusting Off Mythology", a Canadian educational TV series which introduced high school students to Greek mythology. The series' soundtrack was later released as an album featuring, among others, "The Shoppe's" most enduring hit, "Bury the Darkness", which is still a favorite on alternative radio playlists.

Divided between acting and singing, Victor ended up being cast in the lead role of Toronto's "Godspell" stage production in 1972 and his musical career, for the time being was left behind. But, the role in Godspell turned out to be a big step forward leading to his successful acting career.

Music always keeps crossing Victor's path, either on musicals roles like "Anthony" in "Sweeney Todd" or "Fredrik" in "A Little Night Music", or on special events like the "This Is Your Song: Broadway Sings Elton John" where he sang Elton John's song "The Last Song".
-Victor Garber