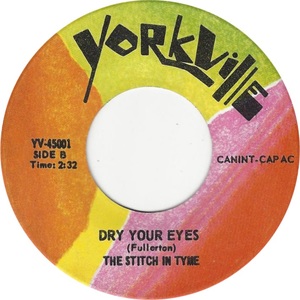 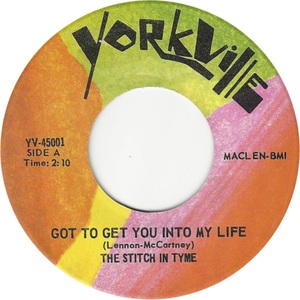 NEW DAWN – THE STORY OF THE STITCH IN TYME

Toronto’s kings of pop harmony got their start with the merger of two popular Nova Scotia area bands. Amherst’s own “The Continentals” featured bassist Donnie Morris, drummer Pinky Dauvin, and future “Stitch” member, guitarist and singer Bruce Wheaton (early member who left to join the Canadian Airforce). The other group in question was “The Untouchables” who featured John Yorke as singer, Grant Fullerton Grant Fullerton on guitar, and Bob Murphy on keyboards.

Both groups were dilapidated and were going nowhere fast. The members were all desperate for a change, something new. They changed their name and began planning their next move. Fall of 1965 proved the moment of truth for the group. They packed up their gear, tampered expectations, and headed for Toronto with stars in their eyes.

Shortly after moving to Toronto in late 1965, the group began gigging and looking for a record deal. Only a few months after making the move, Bill Gilliland, vice-president of ARC Records, liked the potential of the band and agreed to manage them; also signing them to the label in January of 1966. There was just one condition that had to be met before the band would be able to do their own thing.

When they came up to Toronto, ARC had a single by a band called "The Golden Earrings" but they had since broken up. “My Situation/Nothing Much” was release in November 1965 and the boys spent the next month and a half living the life of a band no longer in existence. The gigs were few and far between and the reception was lukewarm at best.

After this period, as promised, Bill Gilliland become their manager and signed them to a deal with ARC Records in January of 1966.This also saw them officially change their name to “The Stitch In Tyme.” With the new name and Bill in their corner, it wouldn’t take long for them to become a fixture on the Toronto music scene.

After signing the group under their new name, they began deciding what direction to go in. Original plans were to record and release an album, but that fell through after the impressionable young members got their first taste of drugs and partying. Toronto in those days for an up-and-coming young band was a death trap of distraction.

Burnt out, they instead were encouraged to record a single. January saw them head into the Eastern Sound Studious here in Toronto to cut some sides.

By March, the single was readied for release and everyone in the Stitch camp was hopeful. It was a strong two-sider featuring Grant Fullerton’s “Dry Your Eyes” on the A-side, a song that seemed destined for chart success with the rich “Beatles-esque” vocals. The B-side was a John Yorke/Bob Murphy collaboration titled “Point Of View.” The B-side is a fantastic garage flavoured rocker with great vocals and guitar work. The single unfortunately didn’t perform as well as many had hoped it would. It charted in some Canadian markets but hardly made it below #85.

As 1966 warmed and the spring thaw took place, the group put their nose to the grindstone, gigging incessantly for the remainder of the year. If there was any debate regarding their reputation before, that was gone now. The group had become an insanely popular live draw around town, even gigging outside the city briefly.

Bill Gilliland had long planned of starting his own label and his relative clout amassed at ARC over the years, helped grease the wheels for his vision. The name? Yorkville Records. Back in the summer of 1966 Bill, alongside Fred White, launched Yorktown records as a place to release the early singles of The Ugly Ducklings who were currently one of the biggest live draws in the city. These early singles garnered national attention for the band due to a brief distribution deal with Capitol Records. The label would morph into “Yorkville Records” by the end of the year when that brief deal ended.

In late 1966 after months of gigging, John Yorke left the group and was swiftly replaced by Bruce Wheaton (Guitar/Vocals). Bruce was originally from Nova Scotia where he briefly was a member of The Continentals; with Morris and Dauvin. Around 1964 he joined the Canadian Air force and briefly put his dreams of music on hold. Upon his departure from the armed forces, Bruce relocated to Toronto, where for around two years he could be seen playing with a few groups; including The Vibrasonics and Chester & The Rogues (later Chester and The Unknowns).

Their manager’s considerable clout helped them get appearances on a few local T.V. shows. They would become a fixture on CTV's weekday program, "After 4” while they continued to build popularity on the local circuit; namely in the Yorkville neighbourhood.

In October 1966, Bill Gilliland’s Yorktown Records became Yorkville Records. He quickly set out assembling a roster of acts that reflected the changing musical trends of the time; psychedelia was blooming all across North America. The Stitch In Tyme were immediately signed to the new imprint; soon joined by local psychsters The Quiet Jungle, Willapuss Wallapuss [5 Rising Sons], Sugar Shoppe, The Big Town Boys; folkies and rockers like Susan Taylor, Ronnie Hawkins, Lost Soul Dept. and many more!

Bill took Stitch into the studio, recording and producing their next single. “Got To Get You Into My Life/Dry Your Eyes” was recorded and released in mid-November 1966. The single soon began climbing the charts in a number of markets across Canada; buoyed by their cover of the Beatles smash-hit on the A-Side.

Their recent successes opened up the door for them to tour parts of the country. They started playing throughout eastern Canada, making a few stops along the way in the U.S. They also were invited to play at the official opening of Expo '67, as well as week-long gigs at Ontario Pavilion and at The Garden of Stars on La Rhonde.

Amongst all the high profile gigs and T.V./Radio appearances, Bill Gilliland booked the group some studio time in New York for that July; smack-dab in the middle of The Summer of Love. "New Dawn/Don't Make Promises" was released by the end of the month.

By September of 1967, the single was doing well enough on the charts and they were constantly appearing on T.V. Around this time, they made the decision to open their own coffeehouse and hang-out joint called The Flick. Situated in the heart of Yorkville, it was an opportunity for them to always have a place to play, and it also became a popular venue for other up and coming groups and artists at the time, including The Lords of London, The Riffkin and The Counts; among others.

1968 was a year of change for the band. The success with their “Flick” club had them thinking they could do it all on their own. The Stitch formed Flick Entertainment Corporation early that year, which was to be their new record label and publishing company. The band had been writing and recording some new material and tried to release some of their favourites. "Stop Wastin' Time" was readied for release around April of 1968 but upon ARC/Bill Gilliland finding out, they were furious and threatened the group with legal action as they were still under contract.

The tense situation over the “betrayal” saw the single shelved and irreparable damage done to the relationship between Bill and The Stitch. Ultimately this was the death knell of the group, the band called it quits by the fall of 1968, and unfortunately due to spending most of their money they closed down The Flick club.

After the demise of the group, many of the members found success in other bands. Pinky Dauvin and Grant Fullerton went on to join the original line-up of Lighthouse on vocals and bass respectively. They stayed with the band until 1971, releasing three albums and multiple singles. Bob Murphy moved back to Nova Scotia in 1969, founding and leading SOMA through their three year lifespan (followed by founding the country rock group “Big Buffalo”), releasing two singles along the way. He also switched from keyboard to rhythm guitar and convinced former Stitch band mates Donnie Morris and Bruce Wheaton to join. Prior to this, Bruce formed the short-lived group “Rockin' Chair” while still in Toronto before eventually moving back to Nova Scotia to join SOMA. After his brief time in SOMA he’d move back to Toronto, founding his own group “Everyday People” which he led for a few years.

As with many great bands from the early days of the Canadian industry, The Stitch In Tyme couldn’t find sustained success. That paired with the relative youth of the members meant that many didn’t see “sticking it out for the long haul” as a viable option. In their brief time together, The Stitch managed to find both local and national success, touring the country multiple times, and becoming DIY pioneers in an industry inseparable with record labels and outside help.