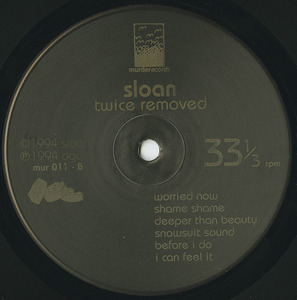 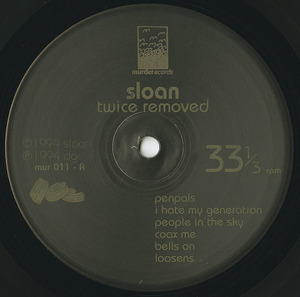 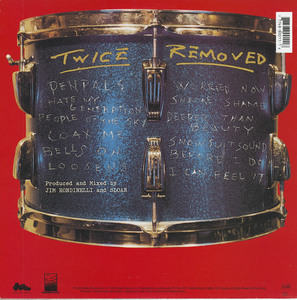 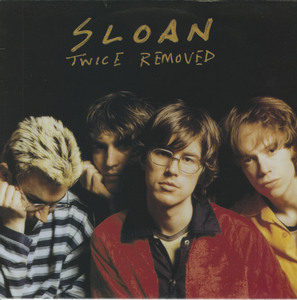 clear vinyl. #1 album of all time by Chart Magazine Canada.

Four guys who were barely out of diapers when the next artist on this list was releasing some of his finest material. Four middle-class lads from the unlikely musical mecca of Halifax, Nova Scotia. In a parallel world, where these lads live among the decay of a post-Thatcher Merseyside, they are hailed as the second coming of the Fab Four. But in this world, they are just four guys, with two proper albums, a few singles, and a thriving independent label. One disc, Twice Removed, is the Rosetta Stone of a subculture. It just keeps getting mentioned. And played. And played. And played. And makes it to the top of a poll assessing the best music ever made in Canada.

Kinda makes you wonder. Jay Ferguson, Andrew Scott, Chris Murphy, and Patrick Pentland, the four quarters of Sloan, have redrawn the map of Canadian music. When the world was beginning to think of Canada as the home of Bryan Adams and Céline Dion (and we have always cared just a little too much about what the world is thinking of us), the four songwriters of Sloan were telling a different story of Canadian experience. When the biggest band in America was named for a state of religious transcendence, Sloan was imprinting our national consciousness with a song about being underwhelmed. And in that way, Sloan was twice removed waking up with the world on fire about something they'd been doing all along without too much manipulation. In the myriad press photos of the band, they always look like they're still rubbing the sleep out of their eyes.

Perhaps we were ready for an album of microcosmic proportions in 1994. It's a sleeper of a record, a collection of 12 small, tangled songs and some unnamed anomie. Hidden among the distinctive harmonies, the memory-piercing melodies, and the distinct contributions of four separate songwriters, different favourites persuade you, coax you, cajole you. Quietly. It's a record for a land of underestimation.

We have always had trouble with epic in our arts; somehow, our huge landscape has kept us in our place, more comfortable with writing in the basement than in the mountains. In Canada, we nurture our relationship neuroses; we rarely simply say, "I love you"; and when we decide to break up, we (like Sloan) can't even do that right. We keep trying to piece something together and the four musicians and songwriters who comprised Sloan quite accidentally pieced together the soundtrack of our discontent.