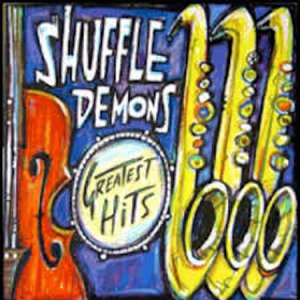 The Demons played 1000s of sold out shows in Canada and Europe, traversing the country and the continent no less than 15 times from 1986-1997, building up a solid fan base that to this day will never forget the music and the antics...stopping traffic with the famous 'Spadina Bus ' walk around, playing a Mingus tune and really meaning it, thrashing around the stage in crazy interpretive 'Roach Death' dance, delivering the classic poem 'What do you Want?'

From our first gig busking in 1984 at Toronto's Eaton Centre to playing for 50,000 at the Montréal Jazz Festival, we always felt that each show was unique, and each fan and band member was part of something special. The interactions with the crowd during our walk arounds and our no holds barred performances captured the imagination of a whole generation of concert goers, and spawned many a jazz career. We're happy we got a chance to do it then, and glad that this compilation of our most memorable tunes is available now. None of this music could have been possible without the support of our fans, friends, families, fellow musicians, the media, agents, festivals and club owners and we thank you all!!

The music on this Greatest Hits compilation was taken from 4 classic Shuffle Demons albums released from 1986 to 1993. We've tried to squeeze all the demon favourites onto this CD, but alas some just didn't make the cut.

Enjoy this collection demonically and as we used to say ' Keep Shuffling!'