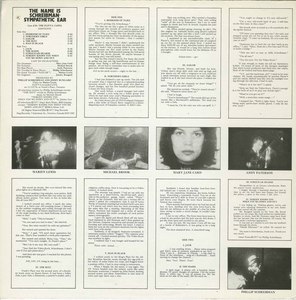 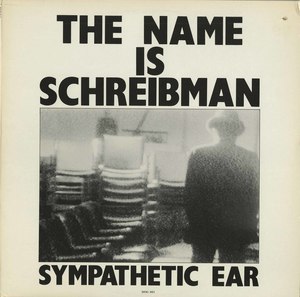 The Name Is Schreibman - Sympathetic Ear

Michael Brooks is inventor of the famous 'infinite guitar', "that is essentially his superior answer to the E-Bow. It gives the guitarist infinite sustain, with a controllable breaking point where the guitar goes into screaming overtone feedback. Unlike the E-Bow, it does not require the guitarist to hold any devices, and with both hands free great expressiveness can be achieved. Wishing to maintain the mystique, Brook is reluctant to discuss exact technical details, but apparently the infinite guitar works electronically, rather than mechanically, by feeding some of the output of his Tokai Strat back into the guitar."

There is a classified ad in the back of issue No.5 of Shades Magazine (August 1979) that says the following:

"FLIVVA'S album (sympathetic ear), a limited Dog 001 release, it still available at Sam's, Records on Wheels, Record Peddler, Millwheel, Canadian Spaces, Beachside Records Works and specially Cheap Thrills (Phil says buy here!). Peter Goddard said it was "a stunning work", "classy and controlled decadence". John Heimbecker, CKMS FM called it "rock and roll for the enlightened eighties", and "the best debut since QUEEN". Wilder Penfield referred to its "first rate songs" as "sardonic". SHADES No.4 encouraged Phil Schreibman to say lots fo things for himself. So don't miss it and then be sorry you did."