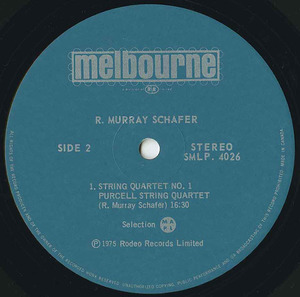 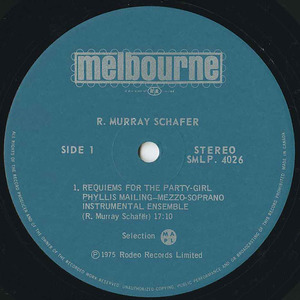 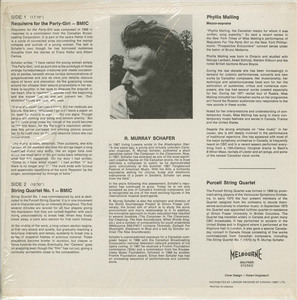 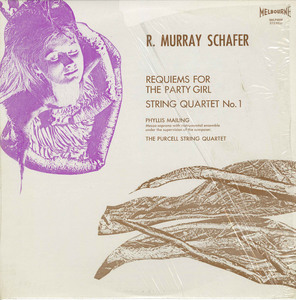 Requiems for the Party Girl / String Quartet No. 1

Composer R. Murray Schafer's 'Requiems for the Party-Girl', in a remarkable performance by soprano Neva Pilgrim.

R. MURRAY SCHAFER was born in Canada in 1933 and studied composition at the Royal Conservatory of Music Toronto. In 1965 he joined the faculty of Simon Fraser University in Vancouver. Mr. Schafer, a prolific composer, is also author of several books on music. The Fromm Foundation awarded the Foundation Prize for 1968 to REQUIEMS FOR THE PARTY-GIRL. Mr. Schafer writes of this work:

"REQUIEMS FOR THE PARTY-GIRL was composed in 1966 in response to a commission from the Canadian Broadcasting Corporation. It is intended as part of my opera-in-progress, PATRIA, and is a cycle of connected arias documenting the mental collapse and suicide of a young woman. The text is my own, though I have borrowed numerous thoughts from the diaries of Franz Kafka and Albert Camus.

"I have called the young woman simply 'The Party-Girl,' and as such she is the prototype of those strange harlequinesque creatures one meets occasionally at parties, beneath whose furious demonstrations of gregariousness and joie de vivre one detects obscure signs of terror and alienation. As the gossiping voices around her whisper their absurd propositions in her ear, there is laughter in her eyes to disguise the anguish in her heart. She is resolved to suicide from the beginning and she knows that no one will prevent her. 'Outstretched hands are rare,' she says.

"If only she could discover a friend. But her methods are bizarre. She says, 'Whenever I go out I leave a paper on my desk for visitors to sign . . . No one signs. Though people are coming and going and seldom silently.' But as the cycle progresses the voices of the world become fainter and fewer, for the Party-Girl's resolution obliterates this whole confused and whirling picture around her to fix itself now on the only absolute future she can comprehend.

"The music is calm, detached. Then suddenly, she kills herself. At the moment she dies the strings begin a long sustained chord very softly, like an organ tone over which the dead spirit of the girl looks back reflecting on what has just happened. 'On my door I had written, "Come in, I have killed myself." I had written "I" but there is no longer any "I".' The work ends with furious and spasmodic repetitions of the word 'Requiem' by the singer, accompanied by throngs of bells."