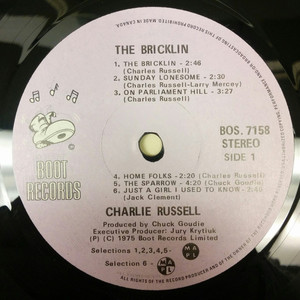 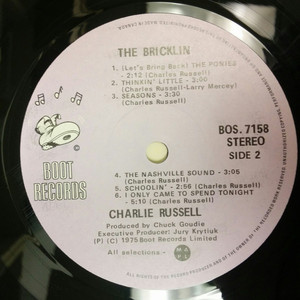 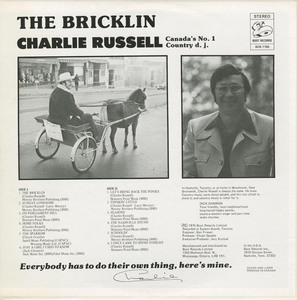 Charlie Russell - The Bricklin BACK 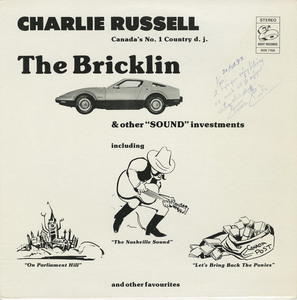 Charlie Russell Charlie Russell was born on July 11, 1937 in Nelson-Miramichi. He came from a musical family. He began playing the harmonica at the age of nine and soon graduated to guitar and accordion. He sang and performed around his home town for years. As a teenager he helped form a dance band called “The Gators” and made his professional appearance in 1958 at the Miramichi Song Festival, playing alongside Alan Mills.

In 1966, Charlie entered and won the Maine-Maritimes Hootenay Championship in Woodstock . He was singing the satirical folksong, “Duffy's Hotel”. Charlie was to make an enviable reputation with satirical songs.

His debut as a disc jockey came in 1969 while working as comptroller of radio station CJCJ in Woodstock . He took over the shift when one of the DJ's left and continued doing this as well as his comptroller's job until 1983. During this period, he did a great deal to promote Canadian country music artists and in 1975 received the first Country DJ Of The Year for Canada award.

About this time he began to be recognized for his satirical song writing. In 1975, Charlie recorded “The Bricklin”, a political country satire album on Stompin Tom’s Boot Records. The Bricklin's were Canada's contribution to automobile design. While the car failed, the song became a hit. The song "The Bricklin" went to # 17 on the National Charts and was featured on National TV and Radio news. Other hits included “On Parliament Hill”, and “Let's Bring the Ponies Back”. He has written more than 50 songs. A learned paper on “Goodtime Charlie and the Bricklin” was presented at the Canadian Historical Association in 1977. All 3,000 Bricklins were assembled in Saint John, New Brunswick.