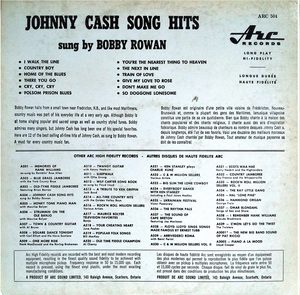 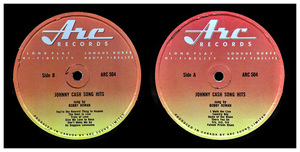 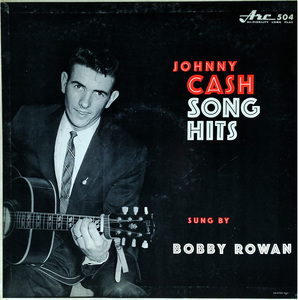 Bobby Rowan DeCourcey (alias Bob Rowan) was born in Minto. He started picking guitar at an early age. Because of economic conditions in the late 1940’s, he left school to work in the local coal mines. Later he switched to driving truck and then to bell hopping. During these year he became a part-time musician and eventually became a regular on the Earl Mitton Radio Show over CFNB Fredericton and the Art Marr Show on CHSJ Saint John. In 1956 he won a Gibson guitar in a talent contest. In 1957 he moved to Toronto to work day jobs while playing various clubs at nights and on weekends.

His deep impressive voice attracted the attention of a recording studio entrepreneur resulting in a LP release “Johnny Cash Song Hits Sung by Bobby Rowan” and a 2nd album “Songs Made Famous by Johnny Cash” a couple of years later. Four of the selections on the 2nd album were written by Rowan. A 3rd album, “Johnny Cash Hits” was released, followed in 1972 by a 4th, “Rowan Country”. One song from the 4th album entitled, One More Favor, went to No. 1 on Canadian charts. During this time he also composed the music for the Canadian movie, “Going Down the Road” which later became a cult classic.

A dry period followed these successes and Bob took day work again. On the morning of December 4, 1982 he picked up a ringing phone at the transit office where he was employed. He was intrigued by the voice of the caller, Mary Morwood. She had dialed a wrong number. They met subsequent to that. Both were suffering despondency form the recent breakup of longtime marriages. He found that Mary had a beautiful singing voice and they formed a duo- Rowan and Mary – and billed as a “real country class act” were soon playing clubs all over southern Ontario and fronting for such famous US acts as Ferlin Husky and Dave Dudley. They released a cassette, “The Way We Met” which resulted in a chart hit for the pair. This success let to an appearance on You Can Be a Star over the Nashville Television Network.

Later they continued working day jobs and performed on nights and weekends. They always dreamed of an international break, but it never came. Music, however, was Rowan’s life…he loved it. He never thought of giving it up.

His death several years ago came as a shock to his wife and singing partner, Mary, and their musical friends – a group that included recording artists Johnny Burke and Ray Penny.