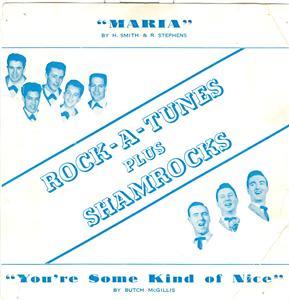 Maria b/w You're Some Kind of Nice (picture sleeve)

The Rock-a-Tunes had their roots in Germany in the late 1940's in Germany when Heinz Schmitz started entertaining the British, Canadian and American troops with country music. Heinz changed his name to Hank Smith, emigrted to Canada in 1956 and settled in Edmonton, Alberta where he formed his first band. Butch McGillis, who previously recorded with Evan Kemp's Trail Riders on Aragon in 1956, met Hank while travelling with Joe Kozak's 'Western Canadian Hayride Shos' and soon the entrepeneurial youngsters formed their own Rock-A-Tune label. They recruited Gordie Gray and Al Girardm while saxman Jerry Triska was added later. They signed to CanadianColumbia for two releases (covering the Collins Kids' Heartbeat) before Hank Smith went on to a great career in country music on Madison, Rodeo, Apex, Quality, TeeVee, Point, Marathon and more recently Bonnie Pearl, where he's plugging a CD of the Rock-A-Tunes cus. Hank has been honoured with many awards including the 'Country Music Hall of Fame of Alberta', the 'Canadian Country Music Hall of Honor' and the 'Order of Canada'.
-from liner notes - Shakin' Up North: Canadian Rockabilly, Vol. 1, Bear Family Records, 1999

A limited number of the singles came with the rare picture sleeve, comprised of a single sheet of paper pasted onto a brown generic type sleeve.