Reaction, The - On The Beach b/w The Kid's Arrived (picture sleeve) 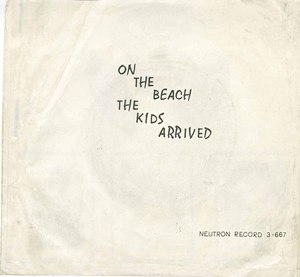 The Reaction - On The Beach b/w The Kid's Arrived 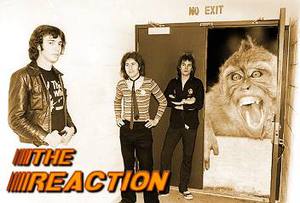 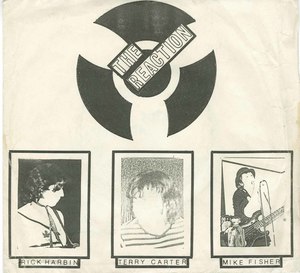 On The Beach b/w The Kid's Arrived (picture sleeve)

The Reaction, Newfoundland's second punk band was formed in December, 1978 in St. John's, Newfoundland. Rick Harbin and Mike Fisher picked up their drummer Terry Carter, aka Pasquale Neutron formerly of Da Slyme, shortly after he completed broadcast school in Halifax.

They played around Newfoundland for a year or so and released this mega-rare punk single. This is the rarest and most treasured piece of punk memorabilia ever to come from the Rock. Only 500 copies were privately pressed and only a handful (reportedly 50-70) were made with the picture sleeve (two different versions). This is so sought out by collectors worldwide that there are probably none in existence on the Rock.

"The Kids Arrived" was later comped on Smash The State Vol. 3 in 1990. According to the liner notes, they got their name from a line in the Jam song "All Around the World".

From Smash The State Vol 3:
Believe it or not, St. John's, Newfoundland's first punk band may not have been the mighty Da Slyme. According to Wallace Hammond, Da Slyme's bassist, co-founder, compiler and archivist, among other things, recorded Mike Fisher and Rick Harbin's art-rock, hard-rock band sometime in 1977. Apparently, at least two of the tracks he laid down on tape were borderline punk.

In any case, the Reaction's real birth occurred when Terry Carter (aka Pasquale Neutron), another co-founder of Da Slyme, returned from broadcast school in Halifax, Nova Scotia where he'd been turned onto the raucous sounds of the Sex Pistols and the Ramones. Since Carter's departure for Halifax in early 1978, Da Slyme had replaced him on drums with, according to Carter, the more competent Justin Hall. Luckily, when Carter returned to St. John's in December 1978 he spotted an ad Fisher and Harbin had placed in the Memorial University of Newfoundland's Thompson Students' Centre looking for a drummer to play punk and new wave music, and so the Reaction was born. They took their name from a line in the Jam song "All Around The World". Their first gig was around a month later, opening for Da Slyme.

Although the Reaction was modelled after The Jam and other Mod bands, their set lists also included numbers by Elvis Costello ("Less Than Zero"), Eddie and the Hot Rods ("Do Anything You Wanna Do") and the Sex Pistols ("Anarchy In The U.K."). In the early incarnation they played mostly covers- to guarantee club gigs. They initially snuck in a few originals, including "The Kids Arrived", "No Excuses", and the "Rest of It All"; the last two songs were never recorded.

Gig-wise they started by playing at the university and the legendary scumpit Middle Earth bar, where Da Slyme also played. In the oddly named town of Old Shop near Trinity Bay, the Reaction had a fairly decent following, where the local youths had been exposed to the Ramones and caught the punk bug. Whenever the Reaction played St. John's, the so-called "Old Shop Army" kids would pile into town for the gig.

Later, the Reaction went out on the "Bay Circuit", a tour of bars along the coast outside St. John's, initially playing contemporary punk and new wave covers. However, Carter admits that was a less than successful recipe: playing songs by underground British bands did not go over too well with musically conservative bar audiences who'd never heard the originals. They soon learned to throw in some high-energy 60s classics such as "Satisfaction", "Ready Steady Go" and "Respectable" and often ended the evening with "My Generation", which allowed Carter to indulge in a Keith Moon once or twice, kicking his kit over while the guitarist and bassist did the splits and hammered their instruments.

Still, it was tough being in the forefront of the new music scene. Carter penned "The Kids Arrived" in response to people who were really negative about this new breed of musicians. At a gig outside of St. John's, one unhappy bar patron bought a copy of the record so he could smash it while the group was on stage. '"The Kids Arrived" is a bit of self-vindication: it's a big 'fuck you' to people who did nothing but criticize", declares Carter.

They never call him for a loss
He'll finally show them who'll be boss
Move over- the kids arrived
He'll be alright...
Climbing the greased ladder rung by rung
Singing a song that must be sung

They recorded the single at Echo Recording Studios in St. John's in March 1979, later pressing around 500 copies at World Records in Toronto. Mike and Terry came up with different picture sleeves, but they only made 50-75 of each. The single quickly made it into local jukeboxes, including the one at the Middle Earth. Distribution, like all the records on this compilation, was DIY.

Also in the spring of 1979 the band recorded three more songs at Echo Recording Studios: "In Tune With The Times", "Trials In Error" and "Till Midnight". They appeared on a posthumous cassette entitled "Underexposure" that was released in 1981 on Wallace Hammond's Vicki Beat label. The original group lasted for 10 months, until Carter left the band in October 1979.

Postscript
Harbin and Fisher recruited another drummer and continued gigging, including a trip to Toronto where they played a few gigs and recorded a number of tracks while Tom Atom at Cottingham Sound. Interestingly, Tom Atom was also the engineer of the Arson and Fits' singles.
-Frank Manley