Power, Colleen - Lucky You Are 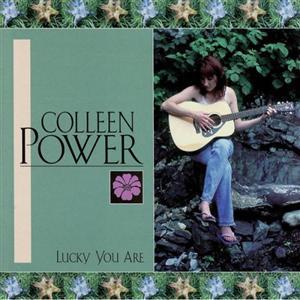 In the early nineteen-nineties, Colleen Power was getting bored with the university courses she was taking at Memorial University in St. John's, Newfoundland, so she answered a bulletin board posting for a vocalist.

Although Colleen had sung in the church choir at home "around the bay" in Freshwater, Placentia, she'd never played with a band or performed on stage before. On a hunch, she answered the call and spent the next year practicing with Girl Drink Drunk, but she got bored with playing in the basement and started singing on her own in bars, debuting a cappella at the venerable Ship Inn on Solomon's Lane in St. John's.

In 1995, Power moved to Hamilton, Ontario with her six year old daughter Robyn, to pursue a career in music. While living in Hamilton, Colleen met a lot of musicians and made plenty of contacts as she got acquainted with "the music industry". She recorded demos at Grant Avenue Studio, played at bars and in festivals around Hamilton and Toronto and had a song included on a Hamilton Music Scene compilation.

After a couple of years, Power had become homesick and headed home to Newfoundland. She set up in St. John's, a city alive with musical and artistic character, and picked up where she left off, singing solo and back-up in the bars of St. John's.

She developed a friendship with singer/songwriter Ron Hynes, whom she describes as one of her early heroes, and regularly sang with Hynes around town and at festivals.

During this period, people started to notice Power's talent as a singer and she found her way onto several compilation CDs.

In 1998, Power formed the Colleen Power Band and started getting ready to record a full-length album of original material. The Colleen Power Band played numerous shows during the next year and a half throughout Newfoundland and the French islands of St. Pierre et Miquelon. All the while, Power continued to perform solo around town, opening shows and singing backup for local artists including Ron Hynes, Dog Meat Barbecue, Jim Fidler, Buddajuke and Skank.

In the summer of 1999, she teamed up with Liz Pickard, Natalie Noseworthy and Angela Dawe to form Live Girlz, a quartet of women who regularly play in other bands.

By October 1999, she was ready to record. Colleen spent the next year recording fifteen of her songs at Fat Tracks in St. John's with Don Ellis. In her travels over the past few years, she had met and played with many of Newfoundland's finest musicians and when the time came to record, she called around to see who would be available to work on the album. She ended up with more than thirty musicians contributing to the finished product. Lucky You Are was released in St. John's in September 2000 and in October, Power set out on the road to promote the album.

Her self-directed, independent tour has included performances in Newfoundland, Nova Scotia, Prince Edward Island, Ontario and in and around Boston, Massachusetts in the United States. The first single, "Mommy's Boy" has received radio airplay regionally and nationally and the video for the second single "Happy Girlfriend" has been featured on Much Music's programs Much East and Going Coastal. The video also airs regularly on Newfoundland Television.

Several other songs from the album are receiving frequent airplay on radio stations across Newfoundland and have been picked up by WERS in Boston. Three songs from Lucky You Are were used in the television series The Associates airing on CTV.

Colleen Power is a strong songwriter whose music appeals to anyone with an ear for interesting musical arrangements and clever lyrics. Her dynamic stage presence never fails to engage an audience as they are inevitably drawn in to the stories she weaves with her songs and the characters who populate her world.

A Delightful smattering of tunes - Colleen Power and all her crazy pals pitching in their talent. Poetic, quirky, hilarious, romantic - more flavours than the ice-cream man. Too many jewels to mention. You'll be glad you picked this up.

Colleen Power is a popular folk guitarist, songwriter and singer from Newfoundland. Her writing and singing encompass both English and French traditions of her home province, giving an international sound to this CD. Continuing along that thought, she's got a cute reggae tune with Caribbean flavour about not-so-cute liars on "Chickadee."

Colleen has taken note that the pen is sharper than the sword and has learned to wield it well. She cuts sharply and deeply, fearlessly thrusting and thrusting again, making no retreat and giving no quarter with her lyrics.

The CD could easily be taken for one themed on bitterness at first glance, but because of the fine music and humourous repartee within many of the songs, it's a feisty form of keeping fit that flouts conventional words and ideas to expose the inner core of a woman's thoughts, bringing us instead to themes of love and life, with gritty revelations and self-assurances.

"Mommy's Boy" could become an anthem and actually might hit home like the flat-side of a rapier on the side of the head, if applied to you. Ron Hynes, Newfoundland's most respected songwriter, sings along on this one and Colleen credits him with being a constant in her musical life.

The theme continues with "Liarcheeterloser" and "Dick-All," which the crowd she's singing to seem to appreciate. She's got a great head for guitar sounds and there is an army of fantastic musicians helping out. Geoff Panting, Larry Foley, Dogmeat BarBQ and Don Ellis to name a few. I found a couple of tracks a little rougher than the rest but hey, sometimes a girl's gotta say what a girl's gotta say.

"Taken Away by Fairies" is a good Celtic hair-raising story sung in Colleen's sweet, unassuming voice, while "Bottomless Pit" has a grunge/alternative noise; though it wasn't one of my favorites, the lyrics follow the theme of the rest of the album.

I didn't understand the three French tracks, "Cauchemar," "Le Fantume, Denis" and "Notre Prochaine Recontre," but they were great musically. Loosely translated , they're "Nightmare, Denis," "The Ghost" and "Our Next Meeting." "Happy Girlfriend" and "Car" are catchy tunes. I would have liked to see all of the lyrics written up in the liner notes.

Lucky You Are is a unique example of one woman's drive for expression and she does it very well, but setting each song in a separate frame of music so it's difficult to describe her music in one style. Modern folk might be close.

"Dick-All" and "Bottomless Pit" are rough diamonds in the jewel case, but the 13 other tracks are enough to give this album a good recommendation. It's very likely going to be the first of many, but this one gives the sense of a colourful phoenix beginning to rise from the ashes. Get to know this Colleen Power before the next one emerges with a brand new example of her musical perceptions.