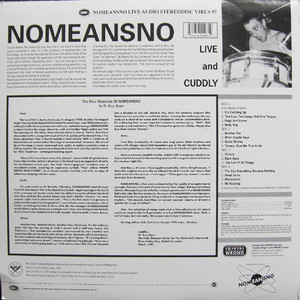 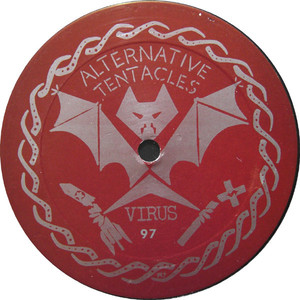 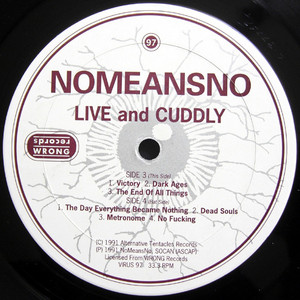 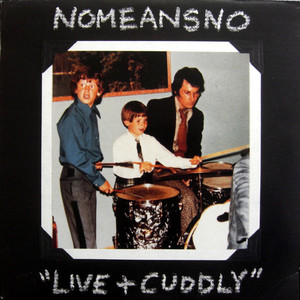 Compiled from a series of European shows in 1990, Live & Cuddly takes the confrontational, searing rage of Nomeansno to another level. It's no real surprise, considering how brilliant the band is in studio, but Live & Cuddly makes for a prime record of a prime band -- perfectly in sync, tight as all hell, yet letting out all possible energy every step of the way. In ways, one could almost see this as the secret influence on a fair amount of both early-'90s math rock and emo, what with the barely controlled fervor of the singing and the sudden jerks back and forth in the rhythm section. There's a sudden savage intelligence in Nomeansno's best work, though, and it doesn't go lacking here with some of the best and most visceral performances: the martial-tinged beats and call and response of "Brother Rat," the near-perfect acceleration/threatening calm of "Teresa, Give Me That Knife," a truly fine "Metronome." Given it's assembled from various sources, one could argue that no one show was quite so on throughout as the disc itself, but frankly, with these end results, why complain? Whether it's the meaty chunk of "Rags and Bones" (with what appears to be a hip-hop break in the middle, or so the calls for Run-D.M.C. would imply), the ever-more intense burn of "What Slayde Says," or the jaw-dropping turn on "Dark Ages" -- perhaps the band's best performance ever up to that point -- there's lots to be taken by here. Some banter surfaces as well -- among other hilarious moments, there's one of the band saying that a confrontational crowd has been listening to too much Stormtroopers of Death during a break in "Two Lips, Two Lungs and One Tongue," as well as the claim that (a particularly grand) "The End of All Things" is an "upbeat, positive song."
-AMG