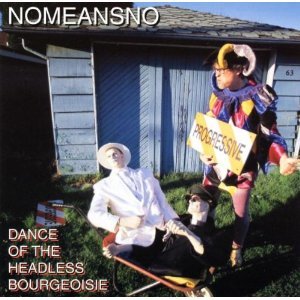 I’ve been waiting a long time for the next Nomeansno. Their last, The Worldhood of the World (as such), was a veritable fantastic album so naturally I was waiting rather impatiently for this one to finally surface. Fortunately with a band like Nomeansno, they seldom disappoint and are proving age is only making them sharper and meaner. Dance of the Headless Bourgeoisie is basically a cross pollenation of their last and 1993’s Why Do They Call Me Mr. Happy?, with equal parts of punked out aggression and the epic length songs. And unlike their last, Nomeansno finally has some decent production that puts all their instruments in the right place without sacrificing their power. The first four tracks charge out of the gate with the steam of a locomotive, armed with a sense of melody (Rob Wright’s vocals have never sounded so powerful or menacing before) and their wacky sense of songwriting. The Wright brothers are still one of the best rhythm sections ever and guitarist Tom Holliston makes his presence known without resorting to some of the noisy dissonace that marked early Nomeansno. On the lengthy title track, which is a ransom note from a would-be kidnapper, Rob’s vocal acrobatics are easily the most impassioned and psychotic he’s ever done. On “The World Wasn’t Built in a Day”, the slow rumbling bass underlies a bizarre mental trip of the narrative. And on “I’m an Asshole”, Rob simply cuts to the chase lyrically. However, it’s the final four songs that really do it for me. “I Can’t Stop Talking” is a silly little ditty that shows Rob in fine talk-sing form and in the same spirit as “The Jungle” on Worldhood. Then comes the intense and gripping “The Rape”, which is an immeasurebly potent brew of musicianship and vocal madness. “Give Me the Push” is simple lyrically, but again Rob’s singing is the impetus for the song. The closer, “One Fine Day”, is just a heavy but happy song that ends the album on an upbeat note.

Nomeanso is approaching nearly two decades of madness and this dance shows they are simply getting more graceful with age.

In their 17th year of existence, Canadian edgy, post-punk hard rockers continue to get meaner. Fast guitar riffs matched by equally quick snare and drumbeats set the background for agitated social commentary. A skewed sense of humor lends itself to the Nomeansno package as being dark and unforgettable, poignant and cutting. The proclamation "I'm an Asshole" and the graphic-as-true-crime violently extortionate title track lend credence to theory that Nomeansno is out to offend, this time. The greatest strength can be found in "Disappear." Musically, this is the classic Nomeansno formula: distorted guitar keeps rhythm matched to an alternating fast and mid-tempo funky rock beat and sometimes a nearly absurd one-string solo juts out. The vocals are syllables drawn out over the faster beats. The vocal rhythm is congruent to the still music. The style is one that owes much to blues and adds drama to the music. The result is a beat and noise mix that is an urgent carrier for a classic message: the desire to drop out. For this reason, Nomeansno always offers something to tune in to.