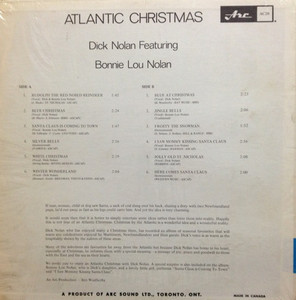 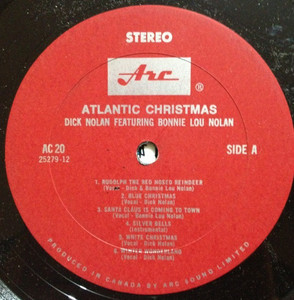 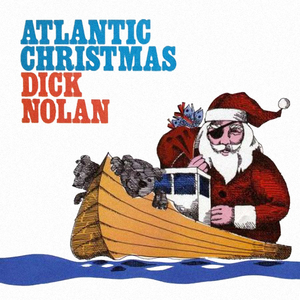 Dick Nolan was a Canadian musician, from Newfoundland. Nolan was known for performing Newfoundland folk music in Toronto night clubs. During his 50-year career he released more than 40 albums and recorded over 300 tracks. Atlantic Christmas is Nolans Folk inspired take on music from the holidays. This project also features Dick Nolan's daughter, Bonnie Lou Nolan on the backend of some of these tracks.

If man, woman, child or dog saw Santa, a sack of cod slung over his back, sharing a dory with two Newfoundland pups, he’d run away as fast as his legs could carry him. And yet the idea is very charming.

It would seem then that it is better to simply entertain some ideas rather than force them into reality. Happily this is not true of an Atlantic Christmas. Christmas by the Atlantic is a wonderful idea and a wonderful reality.

Dick Nolan who has enjoyed many a Christmas there, has recorded an album of seasonal favourites that will warm any celebrations enjoyed by Maritimers, Newfoundlanders and their guests. Dick’s voice is as warm as the hospitality shown by the natives of these areas.
Many of the selections are favourites far away from the Atlantic but because Dick Nolan has home in his heart, especially at Christmas, he informs them with a special meaning: - a message of joy, peace and goodwill to those with the East and the sea in their hearts.

We invite you to enjoy an Atlantic Christmas with Dick Nolan. A special surprise is also included on the album. Bonnie Lou Nolan, who is Dick’s daughter, and a lovely little girl performs "Santa Claus is Coming To Town" and "I Saw Mommy Kissing Santa Claus".