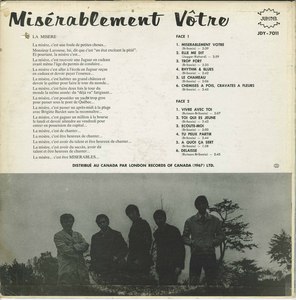 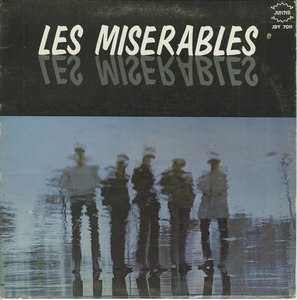 Les Misrables began as a garage band in 1962. Most of their material was instrumental, paying homage to their heros, the Ventures. Their first gig was at their high school, Christophe Colombe, in downtown Montréal. Later on they played some teen dances and were working under the name Les Coronets.

Having attained a rudimentary level of musical proficiency, they began playing local schools and dances. Graduating to Montréal's club circuit, a stint at Club Yé Yé was broadcast by a local radio station which in turn caught the attention of Jupiter Records owner Yvan Dufresne. Signed to a recording by Jupiter, the group was forced to change their name when they discovered another set of Coronets had already laid claim to the nameplate.

Inspired by the Victor Hugo novel, the group made their 1965 debut with a cover of Jesse Hill's 'Ooh Poh Pa Doo' b/w 'Pourquoi?' (Jupiter catalog number JP-1029). The single did little commercially, but following an image change that saw them shift into Rolling Stones bad boys mode, they reappeared with their sophomore release 1965's 'Elle Me Dit' (coincidently a cover of The Stones 'Tell Me') b/w 'Vivre Avec Toi' (Jupiter catalog number JP-1036). The new image proved magnetic and within a couple of weeks they found themselves on tour opening for better known groups including Les Bel Airs and Jenny Rock.

Les Miserables refused to follow the Québecoise teen music scene by performing and recording mostly original material. Most bands at the time played covers of English language hits of the day. It took two more flops before "Chemise A Pois, Cravates A Fleurs" or "Polka Dot Shirts and Flowered Ties" scored a big hit for the band in 1966. The record label decided the band should record and album on the strength of this single.

In 1967, the band played at the Garden of the Stars during Expo '67 which was their only chance to play for an international audience. Two more singles spun off the LP, but Les Miserables did not become as popular as Jupiter would have liked. The band was pressured into a "Beatles" look with matching suits and ties. Bibosia said "it was the beginning of the end". The band had given into the pressures of the business where they had once stood fast to their beliefs. They thought they had sold out. In the wake of their break-up, Les Miserables recorded their great punk masterpiece, "Misrablement Votre".

A complete and more detailed biography of Les Misrables along with photos of the group appear in Feline Frenzy #9 by Marc Coulavin.