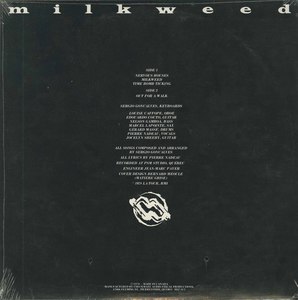 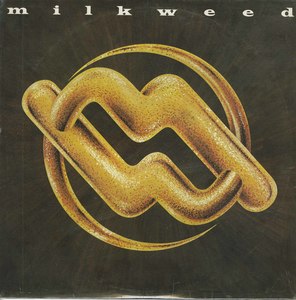 Milkweed was a project by Pierre Nadeau and Sergio Goncalves. All of the other members were hired for the studio recording. Originally released on vinyl in 1978, the album was re-issued in the nineties by SynPhonic Records, and again on Disques L'aller-Retour AR003. The original record is quite different from the subsequent releases. The original masters had been misplaced by the producer in Quebec City and a different master was used. Somehow 'Out For A Walk' was truncated and lost the baroque final part; and Milkweed is another version alltogether. There was a second album in the works but never realized.

"The music covers a great scope of styles, from the almost New-Wave synth pop of the first track, 'Nervous Houses' to Avant-Garde, Symphonic, and even, thanks to some synth sounds, Neo-Prog. Accompanied by some amusing narration/poetry, the players are often in full-throttle mode, especially the Keyboardist, Sergio Goncalves, who composed all the tracks. The track 'Milkweed' is a prime, prog arrangement, and 'Time-Bomb Ticking' (8.10), is a fast and furious jam with some fantastic drumming. The overall production is very crisp and clean sounding. Side 2 consists of a shorter than usual, side-long composition, 'Out For A Walk' and is totally instrumental with 3 distinctive sections. Starting out with some avant-jazz piano backed with upright Bass, this lasts the first 4 minutes or so, then the band comes in with a mid-tempo groove, featuring a long synth solo, which then gives way to the almost baroque sounding end section with piano, oboe and acoustic guitar.

Multi-discipline artist Pierre Nadeau appears as vocalist on the album, his contributions consisting primarily of spoken-word poetry, Tibetan bowls, and sound therapy. Saxophonist Marcel Lapointe is an established performance artist and chamber musician who has also appeared as a guest artist on world-music recordings such as those of MUSA DIENG KALA, and continues to perform today in the Quebec area. Guitarist Jocelyn Sheehy appeared as a stock musician in the 1974 Francophile film 'Guitare'. The remainder of the members of the project have largely disappeared from the international music scene.

A superb album, worth tracking down for all serious prog-heads."

-by Pierre Nadeau and Robert Williston