Metric - Live it Out 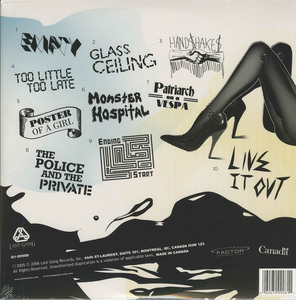 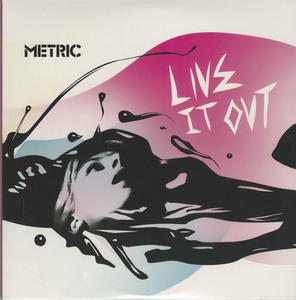 When Metric's Emily Haines smoothed lip-smacking gloss over Broken Social Scene's winsome Anthem for a Seventeen Year Old Girl back in 2003, a star was born. Here was a woman whose soft, girlish vocals only served to sharpen her spiky viewpoint; an emergent talent who wasn't content to merely exploit the musical DNA - and band members - she shared with Canada's leading scenesters.

Released the same year, Metric's Old World Underground, Where Are You, put Haines firmly centre stage. As pop as it was political, the debut was a mind-engaging dash around the dancefloor, an electroclash-influenced, new-wave plea to the mainstream to "fight off the lethargy", as Haines sang in the candy-coloured anti-war cry of Combat Baby. But the album never escaped the feeling of being a one-woman show and stirred the ghoulish spectre of Britpop's Sleeper.

Two years and two Rolling Stones support-slots later, Live It Out is a confident, cohesive exorcism of such unflattering ghosts. Lighter on the obsequious keyboards - played by Haines - and heavier on Jimmy Shaw's hard guitars, it's the sound of a band moving even further away from their contemporaries.

It's to Sonic Youth and their gritty punk that they've turned, with Haines inching closer to P J Harvey's questioning attitude and vengeful delivery, especially on the provocative strut of Glass Ceiling. There's little of the acoustic loveliness that shimmered in Old World Underground, Where Are You, but instead a series of well-executed honey traps, the coquettish uh-uh-uh of Too Little Too Late turning into the triumphant riot grrrl squeal of "I've been bad!" on the itchy Monster Hospital. But Haines never lets her sassiness encroach on her vulnerability, which shines through the one-night-stand solitude of Poster of a Girl.

The politics are still there, but this time it's more personal. "You can take a live wire into the bath with you/ For the feeling you can't find," she coos in Too Little Too Late, making suicide sound like the most gorgeous option in the world. Patriarch on a Vespa cleverly tears up old-fashioned expectations, with Haines musing "are we all brides to be?" before launching a scathing attack on domesticity.

Though too many of these songs nudge the five-minute mark, Metric have discovered a maturity that matches Haines's complexity. Broken Social Scene were lucky to get her when they did.
-The Guardian