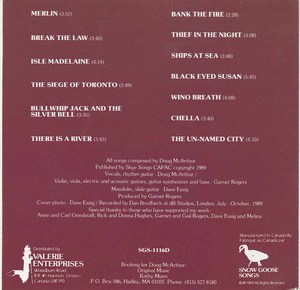 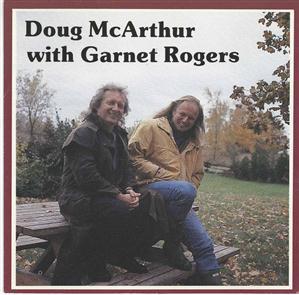 I did a lot of touring with Garnet at this time and he recorded a couple of my tunes: "Break the Law", "Black-eyed Susan" on his first album. We were playing a lot together so it made sense to do a CD. Garnet is an excellent accompaniest (as he proved in Stan's band) and I think he missed that role as his solo career blossomed. Coyly we named the CD: Doug McArthur with Garnet Rogers. At any rate, it was great for me, playing opening act to sold out houses and a real opportunity to see the country again. The songs were: Merlin, Break the Law, Isle Madelaine, The Siege of Toronto, Bullwhip Jack & the Silver Bell, There is a River, Bank the Fire, Thief in the Night, Ships at Sea, Black-eyed Susan, Wino Breath, Chella, The Un-named City. I sang and played guitar and Garnet played violin, viola, electric & acoustic guitars, guitar synthesizer and bass. Dave Essig played mandolin and slide guitar. The CD was released on Snowgoose Records, Garnet's label. I believe it was the first CD they ever released (previous titles were released in vinyl and cassette formats). The CD was popular, likely due to Garnet's name being on it, and "Black-eyed Susan" was covered by a number of artists in the US. "Merlin" from this CD was covered in the US by Kathy Mar, a famous "Filk" singer ("filk" being science fiction folk music). It consistantly turns up on lists of favourite classic filk. Incidently, I finally got to play at Mariposa in 1990 (30th anniversary). This festival had always been a major influence and even though I was once tossed by security staff off of Toronto Island for trying to sleep in the bushes it was a good feeling to be on the bill.