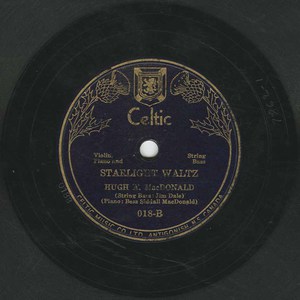 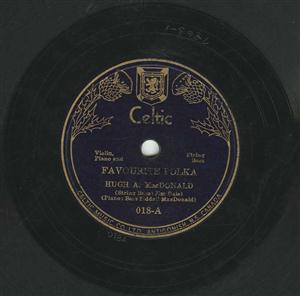 Hugh A. was one of the most popular fiddlers in eastern Nova Scotia. For about seventy years, he played for concerts, dances, weddings, funerals, highland balls, and picnics. He did not play music as a full time job, but he would play for many functions, giving freely of his time or for very little pay, maybe a couple of dollars for hours of music.

"Hughie the Fiddler" also used to make live performances on radio. He would visit CJFX AM 580 in Antigonish and play live on air with his wife, Winnifred on piano or his sister, Janie MacDonald Bailey.

Musicians from Antigonish County, Cape Breton, throughout Canada and Scotland have all paid visits to the MacDonald home to hear Hugh A.'s fiddle music. Some of his visitors included Cape Breton composer/fiddler Dan R. MacDonald and Scottish violinist Ron Gonella.

He was a very popular dance player and his specialty was polkas. There are five figures to the Antigonish square set and polkas were played for two of the five figures. It is said, that for every dance he played a new polka and so he had a very large repertoire. Because of this, he was nicknamed ³The Polka King². Cape Breton fiddler, Winston Scotty Fitzgerald used to say that when you go to Antigonish you've got to play lots of polkas, probably because they were so used to dancing to Hugh A's polkas.

To this day, his grand-daughter, fiddler Kendra MacGillivray, plays many of the polkas that Hugh A. made popular. Tunes such as the Honeymoon Polka and Crooked Stovepipe are favorites for fiddlers and listeners all over Canada. He did not compose these tunes, however he put the names to some of the them and recorded them first. It is believed that a man from Westville, NS wrote many of the polkas that Hugh A. used to play.

In the spring of 1935, Hugh A. & Colin J. Boyd, a fiddling friend from Lakevale, Antigonish County, made an historic trip to Montreal, Quebec by train, to make some of the first fiddle music records which would someday become treasures to family members and music collectors. They each recorded two records with two selections per record. On this trip, Hugh A. recorded the Honeymoon Polka & Crooked Stovepipe/Archie Menzies & Fisher's Hornpipe on his first record (002) and on the other (004) Mrs. Hutton & Miss. E. Elder/Clear the Track & Napoleon. Hugh A. was accompanied on piano by Mrs. Bess Sidall (Willie Hector) MacDonald.

Later in the same year of 1935, Hugh A. & Colin J. returned to Montreal to record five more 78s along with other musicians from Cape Breton.

About sixty years later, in 1996, Hugh A.'s grand-daughter, Kendra MacGillivray recorded, "Clear the Track", a CD where she dedicates her musical inspiration to her grandfather. She selected many of the tunes that he recorded and often played for this recording and this CD was very instrumental in bringing those tunes back to the forefront. MacDonald's 78rpm records are no longer available and it's very hard to find gramophones to play them, so some of the music hadn't been heard for many years.

In recent years, Hugh A. MacDonald has been showered with honors for his contribution to East Coast (Atlantic Canada) music.

In 2001, Hugh A. was honored with a special award at the East Coast Music Awards in St. John, New Brunswick. He was one of four recipients of the "Stompin Tom Award". Previous winners of this award include fiddlers Colin J. Boyd and Don Messer. His wife, Winnifred accepted the award on his behalf and his grand-children, Kendra, Sabra and Troy MacGillivray performed one of his most popular pieces of music, The Polka #3.

In 2002, Hugh A. was inducted into the Clan Donald "Hall of Fame" which is located in the Hall of the Clans at the Gaelic College of Celtic Arts & Crafts in St. Anne's, Cape Breton.

On August 14, 2003, Hugh A. will be inducted into the Nova Scotia Country Music Hall of Fame, Home of the Hank Snow Museum. It is believed that many years ago while Hugh A. was playing for a function at the Celtic Hall in Antigonish, that a very young Hank Snow was there and asked to accompany Hugh A. on guitar for a few tunes.

Celtic music has never been so popular and it is due to musicians such as fiddler, Hugh A. MacDonald, who loved the music so much and played to make people happy. He has inspired countless musicians and is definitely one of Eastern Canada's treasures.
Source: http://www.kendramacgillivray.com/hughamacdonald/index.htm