Kris, Bobby and the Imperials - Travellin' Bag b/w Walk On By 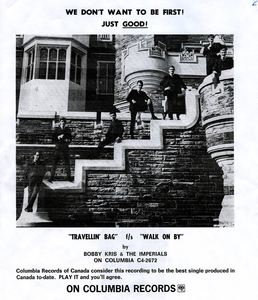 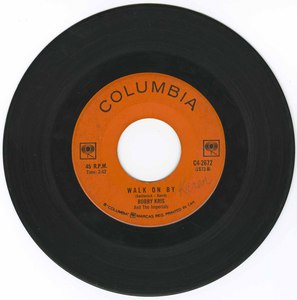 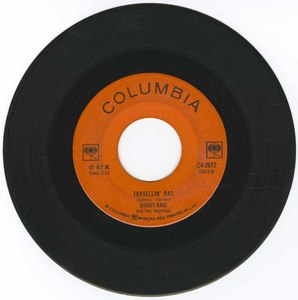 The group's debut single, a cover of Burt Bacharach and Hal David's "Walk On By" was released in November 1965 and reached #8 on Canada’s RPM chart early the following year. The follow-up 45 was a Bob Dylan cover but was not as successful. The group also did an orange juice commercial, which was never released, around this time.

In early 1966, the group opened for Wilson Pickett at Toronto’s Masonic Temple (when Jimi Hendrix was his guitarist) and supported The Beach Boys in Port Arthur (now Thunder Bay).

In a surprising coupling, the band appeared at the O'Keefe Centre on April 13, 1966 with the Canadian National Ballet Company, playing in the lobby during the intermission.

Bobby Kris & The Imperials were chosen as opening act for The Lovin' Spoonful at Toronto’s Massey Hall on May 8, 1966. Shortly afterwards, Wayne Davis (born April 28, 1946 in Toronto) from The Just Us replaced Dave Wayne who left to join The Majestics. Loth and Shymanski also left at this point. Loth then later joined the Silhouettes led by Doug Reilly (Dr. Music).

The new line-up continued to play extensively in the Toronto area, although no other singles appeared. They were one of 14 local groups to play at a 14-hour pop show at the Maple Leaf Gardens in Toronto on September 24, 1966. The following month, former member Jerry Shymanski joined Eddie Spencer & The Power, which evolved into Grant Smith & The Power.

Bobby Kris & The Imperials supported Sam The Sham & The Pharaohs at the Club Kingsway in Toronto on October 22, 1966 alongside The Ugly Ducklings and The Ardels.

In the spring of 1967 the band started to fragment. Martynec left to form Kensington Market in May and was replaced by former Majestics keyboard player Jimmy Oskirko. The new lineup started to experiment more and played regularly at the Concord Tavern where the band performed a cover of The Beatles’ "A Day in the Life". This version of the group also opened for Jose Feliciano at Massey Hall.

By September, however, it was all over. Fisher and MacBain left to join Bruce Cockburn’s Flying Circus. Kris replaced Jimmy Livingston in Livingston's Journey in late October while Davis subsequently joined 3's a Crowd in December.