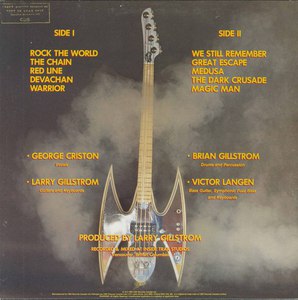 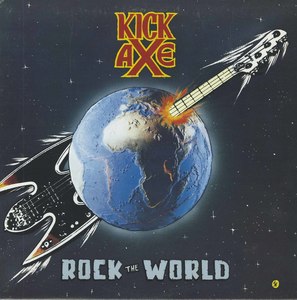 Rock the World is the third studio album by Canadian heavy metal band Kick Axe. The album was released at the end of 1986 in the format of vinyl and cassette album on Epic Records, distributed through CBS in the band's native Canada.

In 2005, the band remastered and reissued the album on CD (albeit with different cover artwork), on their own label. Included is a bonus track "Piece of the Rock", a leftover from the Vices recording session in early 1984.

In 2016, a UK label Rock Candy remastered and reissued the album on CD in a 'De Luxe' version comprising a comprehensive booklet, loaded with vintage photos and a very detailed band history by Malcolm Dome.

Recorded and mixed at the Inside Trak Studios, Vancouver, British Columbia, Canada and produced at the Emil's Studio, Surrey, British Columbia, Canada by Kick Axe's guitarist Larry Gillstrom on a very limited budget. Similarly as on the Welcome to the Club album, Rock the World includes one covered track, "The Chain", originally from the Fleetwood Mac. The album combines the rawness of the debut with the commercial touch of their follow up, but this album is going harder and never captures as easily as its predecessors. It is considered to be the weakest of the band's 1980's era albums.

This album has never made it into the Billboard 200 album chart.