Jones, Mike Group - Each and Every Day b/w Funny Feeling 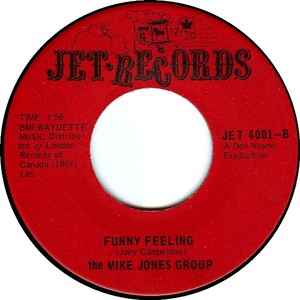 Each and Every Day b/w Funny Feeling

The song "Funny feeling" is one of the best punk screamers with fuzz guitar. One of the very top Canadian records of the 60's, its origins were somewhat obscure until now.

The A-side is a good cover of "Each and Every Day", recorded by Manfred Mann and written by Mike Hugg. The flip, "Funny Feeling", is something else altogether, blending a heavy fuzz riff, pounding drums, swirling organ and a first-rate vocal, with a ripping guitar solo to top it all off. It was written by the group's bassist, Joey Campelone.

Mike Jones was an alias for Michael LaChance, a recording engineer from Montreal. I'd read that he put a studio band together with musicians from other groups for this 45, but the band was actually a working group. Roger Rodier described recording an acetate with the Mike Jones Group and traveling to New York to try for a record deal which didn't materialize.

Jet Records was run by Don Wayne Patterson and distributed by London Records. Rumor had it there is a whole LP's worth of material in the Jet vaults, but that seems to be an exaggeration.

Keyboardist George Legrady wrote to me with some information about the band and also his later experience with the Haunted:

The Mike Jones group in Montreal consisted of Mike Jones (Michel Lachance) on vocals, Earl Kimble on drums, Joey Campelone on bass, Ricky on lead guitar, I think Bill Smith on rhythm guitar, (he and I later played in the Haunted with Bob Bosak, Johnny Monk, Gary Marcus) and I on keyboards. I was the last to join the band in January 1966. We rehearsed in the basement of a suburban house out in north Montreal - I think Pierre Dumouchel was the name of the roadie and it was his parents' house.

We were together for about 1.5 years and played all the time. There was a lot of youthful "lets conquer the world" energy. I was the youngest at 16 as most of the others were between 18-19 which at that time seemed to make a big difference. We played week-ends mostly french canadian dance halls. I remember competition were "The Sinners" but then we crossed paths with the Rabble, and did see and admire the Haunted. We began with Animals songs, and moved on to Kinks, and other top music of the time. It was a great experience to be part of this group as for me, I was still in high school and it definitely gave me a boost in the "getting out into the world" scheme of things.

The group was very eager to get Don Wayne as manager.

"Funny Felling" was recorded in a Montreal studio near Cotes-des-Neiges Blvd. The song was written right near the end of the band's existence, in fact,. I played a Hammond B3 with leslie speaker, but on gigs I normally used a Hohner keyboard and Fender amplifier. I dont have any photos, nor have kept in touch with anyone, but I do have a tape with three other songs. We used to play at a club called the "Jail" in east end Montreal and one of the songs begins with an intro by Don Wayne...I have to find it...

Mike Jones Group stayed together from 1966 to about 1968. The band broke up because Mike got the offer to become a recording engineer at the studio where we recorded "Funny Feeling" [and] reverted back to Michel Lachance. I knew Roger Rodier but don't remember when he was with the band. I think before I was in it. I don't know what happened to the players.
-Garage Hangover

Wow I cant believe I found this .my father was EARL KIMBLE the drummer .