Islands - Return to the Sea 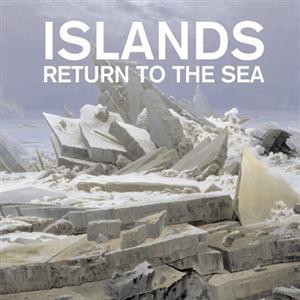 On their debut record, Return to the Sea, Montreal's Islands have crafted a rich, exciting, and emotionally deep sounding album that carries on the freewheeling spirit and sound of the Unicorns as well as that of the Elephant 6 bands of the late '90s. You see, Islands singer/guitarist/songwriter/producer Nick Diamonds and drummer Jaime were members of the Unicorns and they have taken the strengths of that band, amplified and adjusted them, added a few more vital ingredients, and come up with a disc that satisfies on a variety of levels and rates among the best indie rock around. The Unicorns were a lo-fi, experimental car crash of a band, equal parts whimsy and exuberance; Islands are a much more adult and measured experience with a much cleaner sound and more classic arrangements (lots of strings, accordions, standup bass, and pianos to go with the cheap synthesizers). Diamonds' voice is much less whimsical; he has scaled back on the Coyne meter from nine to around five and now conveys his slightly off-kilter lyrics with more emotion and honesty. Despite the changes, the group hasn't lost any of the sunshine-addled spark that the Unicorns had, as songs like the whirling "Don't Call Me Whitney, Bobby" or "Jogging Gorgeous Summer" (which comes kitted out with steel drums and recorder!) clearly demonstrate. The trippy "Volcanoes" (nice rock snob reference to the Troggs tapes in the lyrics), the indie psych/hip-hop mash-up featuring the rhyme skills of Subtitle and Busdriver, or the epic-length psychedelic singalong that opens the record so nicely ("Swans [Life After Death]") show that the band hasn't lost their ambition, either. "Ones" itself has more big-hearted ambition and dramatic power than most bands could dream of unleashing. The lovely instrumental "Tsuxiit" or the sweetly pop-rocking "Rough Gem" sound like the work of another band entirely, and indeed all of these comparisons to the Unicorns are ultimately irrelevant. It's not like you have to be a fan of that band to fall in love with this one. All you need is a love of melodies and innocent indie pop weirdness, two things this album has plenty of.