Hynes, Ron - Get Back Change 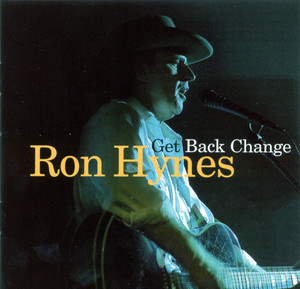 Get Back Change, (produced by Paul Mills at the Millstream Studio) was released on May 21 by Borealis Records with a launch at Hugh's Room in Toronto. Additional launch events were held in St. John's, Ottawa/Wakefield, and Halifax. Ron toured extensively throughout Canada including appearances at the Stewart Park Festival, Folk Under the Clock, Chester Playhouse, and the internationally renowned Stan Rogers Folk Festival.

In November 2003, Ron Hynes was named Male Artist Of the Year, Country Artist Of The Year, and was recipient of the SOCAN Song Of The Year Award (Get Back Change), from the Music Industry Association Of Newfoundland and Labrador.

REVIEW - Greg Quill, Toronto Star, June 2003.
"Get Back Change" (Borealis Records) - One of the great Canadian songwriters, Hynes has worked for most of the past 30 years in and around St. John's, Nfld., content to stay close to the stories and characters that have given his work such rich authenticity. By no means unrecognized - many of his songs have been covered by American and Canadian roots artists, and his big one, "Sonny's Dream," assures him of a workable reputation in most parts of the world - Hynes remains an elusive character on the fringes of the big time, though he's a festival favourite, and can fill a concert room with almost no notice, as he did last night, when the release of this remarkable album - arguably his best, most focused work - was celebrated. Produced by Canadian roots music veteran Paul Mills, "Get Back Change" is a distillation of Hynes's best qualities. He's an elegant storyteller, a tender balladeer, a chronicler of brutal hard-luck yarns, a raging cynic (check out the Tofler-esque "Record Man" for a dose of powerful vitriol), and possesses an earnest, honest voice that draws the listener in. The production is tasteful and subdued, allowing the considerable gems here - best cuts are "A Good Dog Is Lost" and the closer, "No Change In Me," a well-known collaboration with Murray McLauchlan - all the more room to shine.

REVIEW - Brent Hagerman, Exclaim! Magazine, September 30, 2003
As a Newfoundlander Ron Hynes knows firsthand the old story of the East Coaster drawn to the bright lights and fast pace of life in Toronto. This archetypal Canadian tale is the backdrop for Get Back Change, and the title track captures this familiar story as aptly as "The Streets of Baltimore" did a not too different one. Throughout Get Back Change, Hynes balances the two geographies of the tale - the outports and the city - both musically and in narrative. Folk country tracks like "Dark River," "A Western Tale," and "My Old Man" capture life in small towns, the Old West and the Atlantic Ocean respectively while "From Dublin with Love," "Record Man" and "Cape Spear" find love and hardship in the big city. But it is the closing track, "No Change in Me," co-written with Murray McLauchlan (recorded for Gulliver's Taxi), that has already become one of this county's enduring classics. As the story of a heartbroken Newfoundlander forced to leave his homeland to find work, "No Change in Me" is not only the leitmotif on "Get Back Change", it cuts straight to the heart of one of Canada's ongoing sociological tragedies. Songs like this are the reason Memorial University gave Ron Hynes an honorary doctorate.